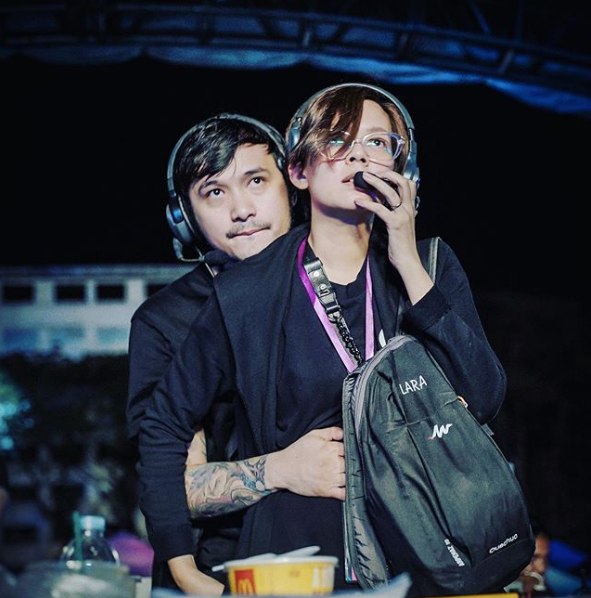 Kean Cipriano and Chynna Ortaleza’s record label O/C Records partnered up with the University of the Philippines’ Student Council to organize the first night of UP Fair—one of the university’s biggest annual events.

The actress and the frontman of Callalily, together with the label’s core team, were in charge of stage management, visuals, band relations and backstage management for a night of performances titled “Hiwaga: UP Fair Monday” at the UP Sunken Garden in Quezon City last Monday, Feb. 10.

After the event, Ortaleza expressed her gratitude for the entire team responsible for the event. The couple and their team gathered for a group shot backstage, as seen in her Instagram account yesterday, Feb. 12.

“The ability to [multi-task] without being asked is something that is important to me as a person,” Ortaleza said. “They all have this ingrained in their being and I can’t thank them enough for all their hard work.”

On a separate post, Ortaleza also shared the exhilarating feeling of creating and collaborating in creative projects with a loved one.

A stolen moment from the night showed Cipriano and Ortaleza in a tight embrace, both sporting black clothes and headsets. The actress appears to be speaking in the headset’s microphone while both of them looked straight ahead.

“I don’t remember a time in our lives when we were not creating something together,” the actress said. “As friends & lovers we were always at work on ideas and concepts.”

Cipriano responded to the post, “‘Til death we do art remember?”

Meanwhile, Cipriano said working with Ortaleza was his “favorite collaboration,” as seen on his Instagram account yesterday.

Aside from performing with his band Callalily during the night and directing the concert, Cipriano narrated on Instagram the tiring experience of organizing the event as a whole.

“May mga times na nabuburn out na kami sa dami ng kailangan asikasuhin (There are many times that we experienced burnout from the workload),” he said.

Cipriano added, “Pero alam kasi namin na lahat ng pagod at puyat at stress ay patungo para makapag contribute sa Pinoy Music Industry (But it’s because we knew that all our hard work and stress would contribute to the betterment of the Philippine music industry).” NVG