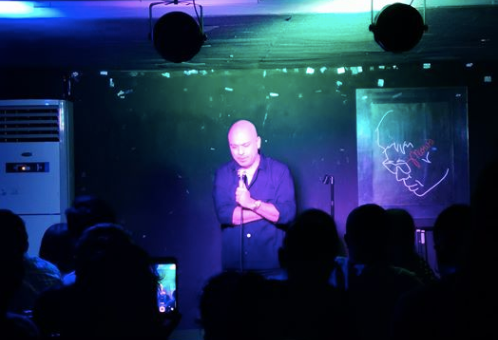 Comedian Jo Koy appears to be making the most out of this visit here in the country as he visited a bar in Quezon City and granted his fans a surprise performance.

Jo Koy is best known for his stand-up comedy special “Comin’ In Hot” on the movie-streaming platform Netflix, where he often harks back to his Filipino-American heritage. The comedian was spotted in Mow’s Bar in Matalino St., where an open mic show was occurring, as per local comedy production Comedy Manila’s Facebook post last Tuesday, Jan. 7.

The bar also announced the comedian’s arrival at their venue on their page.

“Jo Koy IN THE BEST BAR IN THE WORLD,” the bar stated on the same day.

Jo Koy IN THE BEST BAR IN THE WORLDEDIT: HE'S HERE RIGHT NOW WITH A SURPRISE SET

The bar also emphasized that the show was not planned, in the post’s comment section. In a separate statement, they also made a request to the lucky audience of Jo Koy’s surprise show.

(To those who were lucky enough to watch the show, let us please not upload [any] video [of the set] out of respect, since this is a free show.)

A few days ago, the comedian was also spotted in Cubao. Jo Koy hinted that he was filming “something special” during his visit to the country, as per his Instagram post on Jan. 6.

The stand-up comedian is set to have two shows in the Philippines, as part of the world tour of his comedy act “Jo Koy: Just Kidding” at the Waterfront Hotel and Casino in Cebu on Jan. 14, and at the Mall of Asia (MOA) Arena in Pasay City on Jan. 15. JB

No kidding, Jo Koy to perform in Manila and Cebu in January

Angelica Panganiban goes on social media detox with Bali trip: ‘I can save them in my memories’