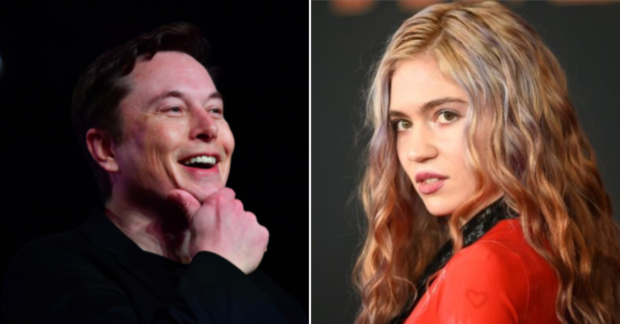 There are speculations that Elon Musk (left) and Grimes are expecting their first child.  Image: AFP Relaxnews

Singer Grimes seems to have made her pregnancy announcement on Instagram with a nude picture of her and a baby bump yesterday, Jan. 8.

Many were surprised at her post, which did not censor her nipples and was edited to show a baby in her stomach.

She said in the comments section that she was “knocked up” and explained why she kept the photo uncensored: “I thought about censoring them for a hot minute haha (this may get taken down anyway) but the photo is so much less feral without the nipples. Plus being knocked up is a very feral & war-like state of being. Might as well be what it is. Plus most of my friends told me not to post them so then I was afflicted w reverse psychology. Interrogated my shame and decided it was sum weird internalized self hated to feel uncomfortable about my body. Hope ur having a nice day!”

The Canadian singer-songwriter, 31, posted the picture again today, Jan. 9, stating that she had to censor it.

Sources confirmed to entertainment news site Just Jared yesterday that she is expecting her first child with the 48-year-old Tesla CEO.

The rumored pregnancy has got Twitter buzzing with memes of how their baby will look like. The couple’s quirky personalities have been joked about since they started dating. Some predict that the baby will look like an alien, or even the Spider Baby from “Toy Story.”

grimes and elon musk baby is gonna come out looking like this pic.twitter.com/NYK4Ar1j9I

is this elon musk and grimes child pic.twitter.com/7v58eudKIP

Grimes and Musk made their relationship public at the 2018 Met Gala. Musk has five sons with his first wife, Canadian author Justine Wilson.  /ra

Elon Musk insists no one interpreted tweet to mean pedophile