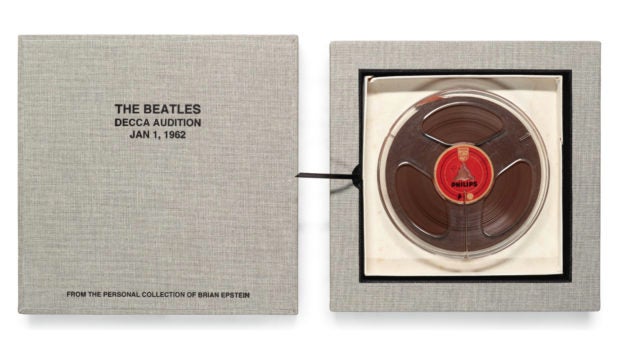 Brian Epstein’s copy of the Decca Audition tape is estimated to fetch up to £80,000 (around $104,000) at Sotheby’s London. Image: courtesy of Sotheby’s via AFP Relaxnews

The rare recording will go under the hammer during the online sale “The Beatles”, which features memorabilia ranging across the British band’s performing career.

This audition tape was recorded at the Decca studio in the London suburb of West Hampstead on New Year’s Day in 1962 — just a few weeks after the Beatles’ notorious live performance at the Cavern.

The yet-to-be-discovered band notably performed 15 songs for their first commercial test for Decca, including “Money”, “The Sheik of Araby”, “Like Dreamers Do” and “September in the Rain”.

Paul McCartney took the lead on the vocals for seven songs, while John Lennon and George Harrison were each on the lead for four songs.

As Sotheby’s points out, Decca Records ended up rejecting The Beatles in favor of Brian Poole and the Tremeloes, partly because the label did not want the inconvenience of transporting the band between their native Liverpool and London.

In his autobiography, “A Cellarful of Noise”, manager Brian Epstein recalled that Decca’s senior A&R Dick Rowe assured him at the time that “guitar bands are out.”

While this unsuccessful audition entered the annals of music history, Epstein’s copy of the Decca Audition tape is now hitting the auction block at Sotheby’s London.

Although recordings from the Decca session surfaced in the mid-1970s, Beatles historian Mark Lewisohn noted that this audition tape is unique.

“The tracks themselves are not unique — the first bootlegs of the Decca session appeared in the mid-70s and three of these seven tracks appeared on ‘The Beatles Anthology I.’ But this tape has a uniquely important provenance and played a significant role in the early history of The Beatles,” he said in a statement.

Among the highlights of “The Beatles” online sale are pieces from the collection of Alan Herring, who was the driver of the band in the late 1960s.

The most-coveted item is a pair of round wire-framed sunglasses by Oliver Goldsmith, which John Lennon wore to prepare for his role in Richard Lester’s 1967 black comedy “How I Won the War”.

Sotheby’s online sale, “The Beatles”, will run on the auction house’s website from Dec. 6 through Dec. 13. IB/JB

WATCH: Idina Menzel, Billy Porter get in the holiday spirit in ‘I Got My Love to Keep Me Warm’