WATCH: Idina Menzel, Billy Porter get in the holiday spirit in ‘I Got My Love to Keep Me Warm’ 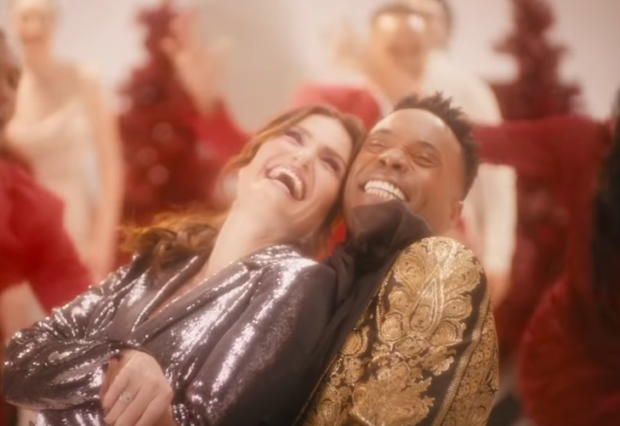 The Broadway legends have covered Irving Berlin’s “I Got My Love To Keep Me Warm”. Image: YouTube.com/@IdinaMenzelVEVO

The full-length found the Tony winner collaborating with various guest artists on a selection of holiday classics and brand new original songs, such as “A Hand for Mrs. Claus”.

Among them are Broadway veterans like “Frozen” co-star Josh Gad and Menzel’s husband Aaron Lohr, as well as pop powerhouse Ariana Grande.

In a recent sit-down with Broadway World, Menzel opened up about the inspiration behind her second Christmas album.

“I wanted to find a balance of songs people know, but also find some that were a little bit more obscure. I envisioned it being a big-band album, obviously with lots of horns and strings. Kind of like a holiday party, but you know, the kids can come… so there’s not too much alcohol!” she explained.

While Christmas is less than a month away, the vocalist has recently unveiled the accompanying music video for her duet with Porter, “I Got My Love to Keep Me Warm”.

The Mercedes Bryce Morgan-directed visual finds the two musicians cheerfully waltzing through a frozen snow town, while singing “The snow is snowing, the wind it is blowing/But I can weather the storm/What do I care how much it may storm/I got my love to keep me warm.”

In addition to releasing “Christmas: A Season of Love”, Menzel has recently appeared in the long-awaited sequel to “Frozen”, in which she portrays Elsa.

Next year, Menzel will reconnect with Porter in the forthcoming Sony musical adaptation of “Cinderella”, in which they will respectively portray the heroine’s evil stepmother and the Fairy Godmother. IB/JB

LISTEN: 5 podcasts from November 2019 — ‘Detective Trapp’, ‘Gaslight’, ‘What Shall We Do About…?’, ‘Marvels’, ‘Remarkable Providences’

LOOK: Regine Velasquez, Sarah Geronimo gear up for concert together