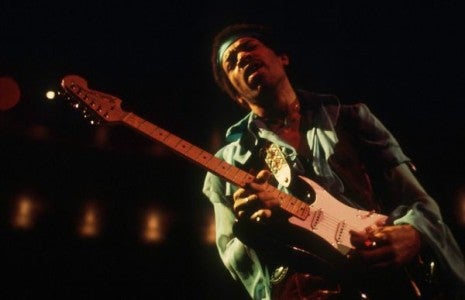 Jimi Hendrix made his debut as part of the Band of Gypsys during four performances on New Year’s Eve and New Year’s Day in 1969 and 1970 at New York’s Fillmore East. Image: Globe Photos/Mediapunch/Shutterstock via AFP Relaxnews

The rare recording will appear on an upcoming new five-CD and eight-LP box set, “Songs for Groovy Children: The Fillmore East Concerts”, which arrives on Nov. 22.

This rendition of “Ezy Rider” was recorded live on Dec. 31, 1969 at the legendary Fillmore East in New York City, where Hendrix was joined on stage by drummer Buddy Miles and bassist Billy Cox as part of the newly-formed Band of Gypsys.

The three musicians made their debut during four performances on New Year’s Eve in 1969 and New Year’s Day in 1970, which provided material for Hendrix’s final live album, “Band of Gypsys”.

These debut gigs at the Fillmore East are now being released in their entirety for the first time in the upcoming collection “Songs for Groovy Children: The Fillmore East Concerts”, which includes several tracks that have never before been released commercially.

Among them are rare live versions of “Changes”, “Stop”, “Lover Man”, “Steal Away” as well as reworkings of The Jimi Hendrix Experience’s classics such as “Hey Joe” and “Purple Haze”.

As Rolling Stone points out, recordings from the concerts have surfaced over the years in compilations such as the 1999 “Live at the Fillmore East” and the 2016 “Machine Gun: The Fillmore East First Show”.

However significant chunks of these performances had been trimmed down for the 1970 live album “Band of Gypsys”, and were never released commercially until “Songs for Groovy Children: The Fillmore East Concerts”.

When asked by Rolling Stone about his debut on stage in the Band of Gypsys, bassist Billy Cox remembers how excited the crowd of the Fillmore East was.

“I distinctly remember you could see people with their mouths hanging wide open about five, six, 10 rows. They had never heard anything like that, but evidently it had sounded good to them, because we got almost a standing ovation after every song,” he recalled.

While waiting for the album release, discover the trailer for “Songs for Groovy Children: The Fillmore East Concerts”. IB/JB