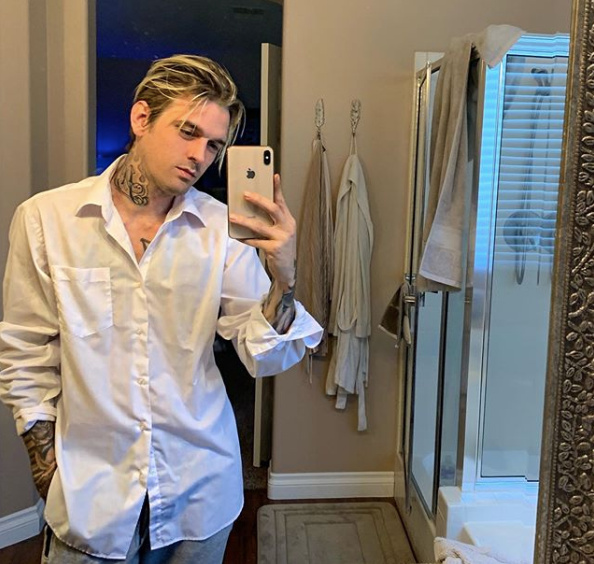 Aaron Carter continues to publicly feud with brother Nick Carter after a restraining order was filed against him.  Image: Instagram/@aaroncarter

Aaron Carter has launched a Twitter tirade against his siblings after his older brother Nick Carter and twin sister Angel Carter filed a restraining order against him on Tuesday, Sept. 17.

Nick, 39, tweeted on Tuesday that he and Angel “were required to seek a restraining order against our brother Aaron.”

“In light of Aaron’s increasingly alarming behavior and his recent confession that he harbors thoughts and intentions of killing my pregnant wife and unborn child, we were left with no choice but to take every measure possible to protect ourselves and our family,” the Backstreet Boys member explained.

According to a TMZ report, the restraining order was filed on Monday, Sept. 17, in Las Vegas. It was claimed that Aaron and Angel were talking on FaceTime on Aug. 7 when he told his sister that he was diagnosed with schizophrenia and bipolar disorder. Aaron reportedly told Angel that he had thoughts of “killing babies” and “killing Lauren Kitt,” who is Nick’s pregnant wife.

Aaron’s ex-girlfriend Lina was in the conversation and told Angel, “How do you think I feel with him sleeping with a sword next to him?” Aaron allegedly told her to shut up and “you are next on my list.” A day after the FaceTime conversation, police conducted a welfare check on Aaron after Angel called them.

“Take care. @nickcarter we’re done for life,” Aaron, 31, tweeted on Wednesday, after announcing that he had been served with the restraining order. “I haven’t seen him in four years. And I don’t intend [to].”

The “I Want Candy” pop singer denied making any threats, claiming that his siblings were trying to commit him involuntarily to a mental institution under the California law code 5150.

I never threatened anyone. I’m appalled by this and don’t ever wish to speak to them again. They’re trying to 5150 me. My brother called me a month ago and told me to “stay off of Instagram live” https://t.co/gsrBcInhOH

He claimed the restraining order comes after he and Nick’s ex, Melissa Schuman, did a live stream about her rape allegations against Nick. Schuman accused Nick of raping her in 2017 as the #MeToo movement gained steam.

“I know you’re mad I spoke to @MelissaSchuman so to retaliate you call the police to take away my legal guns and you file a restraining order #pathetic #Coverup,” said Aaron.

In a series of tweets, he claimed that his brother had abused him after Nick allegedly broke his nose multiple times. He cited another instance when his brother allegedly pied him in the face during an acceptance speech.

I was 13 look at my brothers face before he broke my nose with a pie at the kids choice awards during my acceptance speech. 👏 hes bullying these women with power and money and now I’m back. And powerful and welsthy and healthy. Nick cannot stop his own reckoning https://t.co/vWRES2KGVY pic.twitter.com/x8HdrMwJWY

He also said that he witnessed Nick abusing his ex-girlfriend Paris Hilton and that he silenced women whom he allegedly sexually abused by paying them or through “fear and extortion.”

“I’m standing by all these victims. Please. @Aphrodite_Jones the victims all want to talk now Maybe do a r Kelly type documentary,” Aaron appealed.

He continued to rant about his brother’s alleged sexual misconduct and abuse yesterday, Sept. 19, calling him a “serial rapist.” He also compared him to Jeffrey Epstein, the late sex offender who ran an underage sex trafficking ring.

On the same day, he claimed that his late sister Leslie had bipolar disorder and raped him when she was not on her medications from the time that he was 10 to 13 years old. Leslie passed away in 2012 at age 25 due to a drug overdose.

He denied that he has been diagnosed with bipolar disorder or schizophrenia and said he had been seeking therapy for 15 years.

He lashed out too at his twin sister Angel for “shoplifting Xanax” and told her to get rid of her prescription while she had a baby. He accused his ex-girlfriend Lina of “conspiring” with his siblings to put him in a mental institution and claimed that she drank alcohol daily.

Aaron and Nick have been feuding for years and have struggled with substance abuse. Both have faced arrests for driving under the influence and additionally Aaron has been arrested for possession of drugs.  /ra

PH-bound Aaron Carter back on track after personal struggles

Aaron Carter splits with girlfriend, opens up about being bisexual