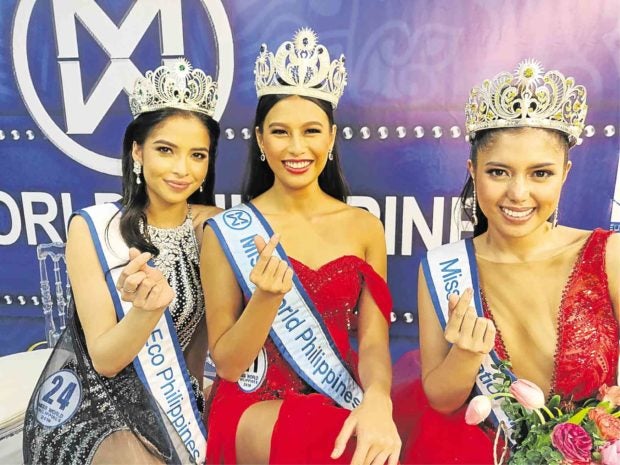 The Miss World Philippines pageant has once again proven to be the beauty contest of choice for show biz denizens, with GMA 7 artists dominating its recent edition staged at the Smart Araneta Coliseum on Sunday night.

All three are pageant rookies.

Michelle, daughter of 1979 Miss International Melanie Marquez with former actor and entrepreneur Derek Dee, bested 39 other aspirants for the title.

Not only did Michelle top the Sports Challenge, she was also on the short list in the Top Model and Beach Beauty competitions.

During the interview round, Michelle acknowledged her mother, who was seated in the front row.

She also shared that Melanie told her to be herself and enjoy the competition. “I do not want to replicate her, but be my own woman,” the new queen said.

“It made me comfortable standing in front of a crowd, having all eyes on me,” Michelle told Inquirer Entertainment in a one-on-one interview after her coronation early Monday morning

But Michelle confessed that she never considered herself as a front-runner. 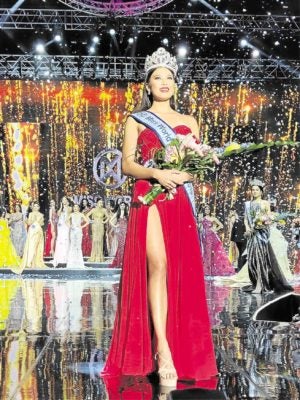 “There was never an ounce of complacency up until I was called. A lot of people kept telling me that I was going to win, but I kept telling them that I’m not going to feel like a winner until they call my name,” said the 24-year-old psychology graduate from the De La Salle University.

In a conversation with this writer last year, Michelle said a lot of people had been convincing her to join the rival Binibining Pilipinas pageant, which crowned her mother in 1979. However, she said she was more inclined to join the Miss World Philippines pageant if she were to give beauty contests a shot.

“I have nothing against the other pageant. It’s just that my values and morals are more in line with Miss World Philippines,” she explained.“I believe in its motto, which is ‘beauty with a purpose’—and I’m here to gain a platform for my advocacies.”

For Kelley, who appeared in the soap opera “Dahil sa Pag-ibig,” her experience working on television helped her gain “confidence.” She explained, “In acting, you have to get in touch with yourself, and know your values and who you really are. And that was the most important thing that I brought into my pageant experience.”

The 24-year-old Tarlaqueña was a member of the all-girl group Girltrends in ABS-CBN’s noontime show “It’s Showtime” before moving to the Kapuso network.

Kelley said being a beauty queen is “about being yourself. In show biz, you can put up a fake character or personality.”

She also admitted that she once faked her age, pretended to be 18 when she was 19, when she started in the industry. “Then, I decided I just wanted to be me. I have no reason to hide who I am. I’ve been coming to terms with that over the last couple of years,” Kelley shared.

But for Isabelle, being an actress has not been of much help to her pageant journey.

“If I were a model, that would have been a good foundation for joining pageants,” said the former Famas best child performer recipient. “But because I’m also a musician, in some ways, I’m used to facing a crowd, which helped me get a crown. I’m a songwriter as well, so I’m quite poetic and it’s easy for me to come up with words that speak to people who are willing to listen.”

All three will seek the Philippines’ second victories in their respective international competitions: In December, Michelle will compete in the Miss World pageant in England, while Isabelle will participate in the Miss Multinational contest in India.

For her part, Kelley will represent the country in the Miss Eco International pageant in Egypt in March 2020.