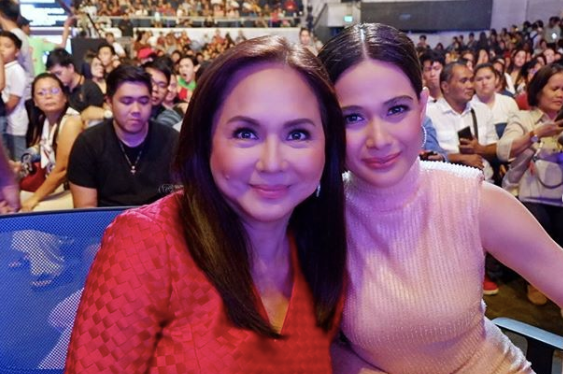 ABS-CBN boss and acclaimed actress Charo Santos-Concio posted a reminder on Instagram on getting facts straight amid claims that she liked a comment insulting the Barrettos.

The former ABS-CBN president’s name has been dragged in fans’ mudslinging on rumors that Gerald Anderson and Julia Barretto had an affair. Anderson has been known to be in a relationship with actress Bea Alonzo, while Barretto has been romantically linked to Joshua Garcia.

A screenshot is circulating online that shows that Santos-Concio supposedly liked a comment on Instagram with regard to the controversy. A fan account of Bea Alonzo (@cabrera.kathbealove) claimed that “everything is true” with regard to the cheating rumors. One @calexbulan replied that it was “in the blood of the Barretto sisters.” A certain @princessrabe responded “truth” to the second comment. It is this last comment that Santos-Concio is believed to have agreed with through a like.

After the rumored like made the rounds on social media on Tuesday, it appears that Santos-Concio is setting the record straight. She posted on Instagram Wednesday morning: “Not all ‘likes’ are real. I did not like that comment.”

The controversy between Anderson and Barretto spread like wildfire after Alonzo made a cryptic Instagram post on Sunday, July 21, that says, “You can’t make the same mistake twice, the second time you make it, it’s not a mistake anymore, it’s a choice.” She has since been liking fans’ posts that sympathize with her over Anderson’s rumored infidelity.

The parties involved—Anderson, Barretto, Alonzo and Garcia—have yet to speak officially about the situation. For now, fans are left to speculate what is fact or fiction based on online posts and interactions.  /ra

ADVERTISEMENT
Read Next
LOOK: Sharon Cuneta, daughters Frankie and Miel fly to Bangkok
EDITORS' PICK
Get exciting deals and discounts when you download the new McDonald’s App
Batangas execs, Taal evacuees thank House; hopeful on rehab efforts
SM continues to send relief assistance to remote towns in Batangas
PAL: Passengers with flights to parts of China may request for refund, rebooking
5 years after Mamasapano, son of fallen SAF 44 trooper remembers his ‘idol’
‘A greener, cleaner tomorrow’: A how-to guide for Filipinos who want to help with today’s energy crisis
MOST READ
Seized food items from China tested positive for ASF–BOC
No time for revelry; Tagaytay instead plans for alert level 5
Taal’s sulfur dioxide emission increases
Dina Bonnevie on Coney Reyes: We have forgiven each other
Follow @NGunoINQ on Twitter
Don't miss out on the latest news and information.