After earning over one million subscribers in her YouTube channel, dubbed Celestine Gonzaga-Soriano, actress and TV host Toni Gonzaga has received the platform’s Gold Play Button.

The coveted Gold Play Button is awarded to channels that have amassed at least a million subscribers.

Gonzaga shared the achievement with her fans and followers by posting a photo of her with her Gold and Silver YouTube Play Buttons, as seen in her Instagram post yesterday, July 23.

Thank you for welcoming a newbie like me in your community netizens! 😍 @cathygonzaga thank you for pushing me to create my own. Feeling millennial na talaga. Cool na ba? 😛

“Thank you for welcoming a newbie like me in your community netizens!” Gonzaga said. ”@cathygonzaga thank you for pushing me to create my own.”

Her sister and seasoned YouTube vlogger Alex, expressed her support for her sister, saying, “IBA!!!!!! (Different!)”. 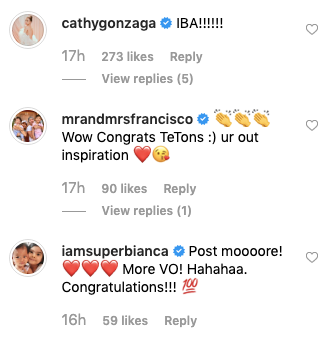 Gonzaga joined the community of YouTube vloggers earlier this January to mark her 35th birthday and her 20th year in the entertainment industry.

She earned the Silver Play Button, an award given to channels that gain 100,000 subscribers, just three days after posting her first video. Gonzaga was able to gain a million subscribers in the span of just five months of creating her channel, as per a post of a fan account dedicated to her, which she shared on Instagram Stories yesterday. 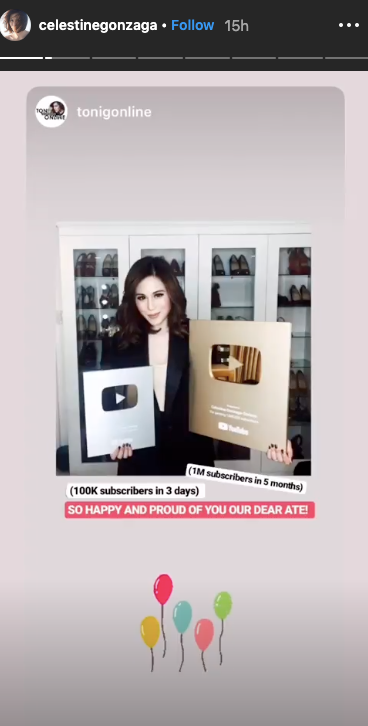 Vlogging is a way to challenge herself to do something different, she stated in her first vlog. It was something she never thought she would do, she said, but she realized that it is another way to connect with her fans.

As she explained in her first vlog, her channel (which currently has nine videos) features bits of her personal life. Her most viewed video, with 3.8 million views, centers on her personal reflection on why it pays to be patient and not to rush into things.

She has just over a million subscribers, as of this writing. Celebrities who have been successful at vlogging include Erwan Heussaff whose channel focuses on food, and Wil Dasovich whose channel features his travels — both their channels have reached the same gold mark. JB