MANILA, Philippines – Actress Bea Alonzo created a stir among fans when she posted a cryptic message Sunday that fueled speculations of a breakup between her and Gerald Anderson.

“You can’t make the same mistake twice, the second time you make it, it’s not a mistake anymore, it’s a choice’ ENOUGH,” Alonzo captioned Sunday a black space over her Instagram page.

“Something I learned about people… if they do it once, they’ll do it again,” she added in an Instagram story. 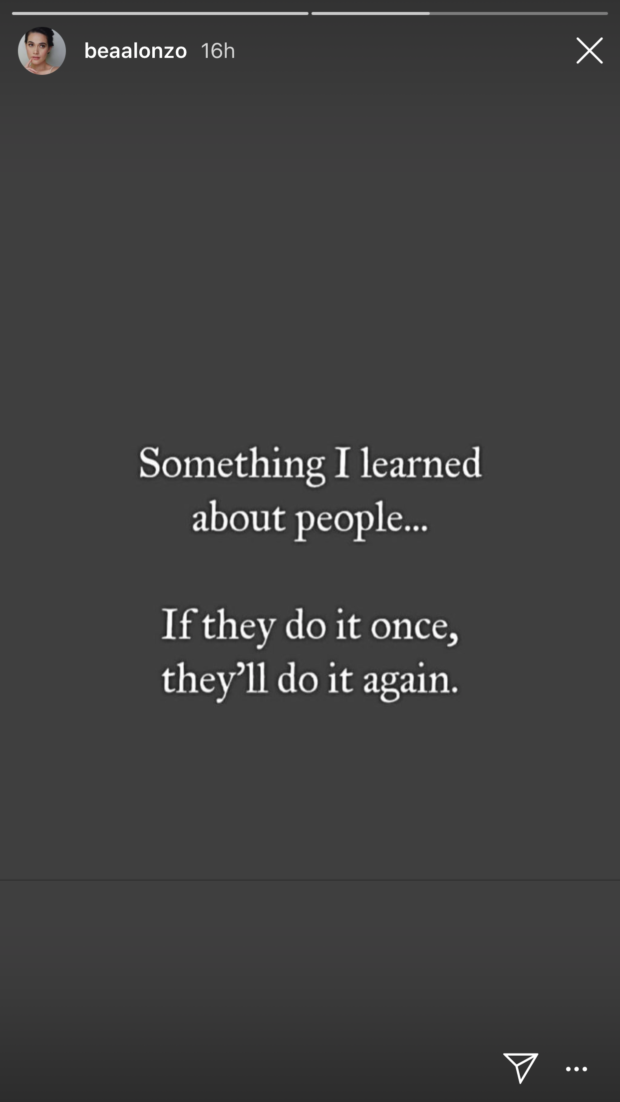 Anderson and another actress, Julia Barretto were reportedly spotted at Rayver Cruz’s birthday party, as seen in an Instagram post of a netizen.

Because of the photo, Julia and Gerald topped Twitter trends in the Philippines.

Barretto and former boyfriend and onscreen partner Joshua Garcia recently admitted they are now back to being “best of friends.”

Rumors about Alonzo and Anderson’s split surfaced last year, but the former revealed in October 2018 that she had given the actor a second chance.

Meanwhile, Barretto and Anderson became a tandem in a romantic drama film “Between Maybes” which premiered last May.  / gsg

Read Next
‘Avengers: Endgame’ has passed ‘Avatar’ as biggest film ever
EDITORS' PICK
DOH: Too early to say COVID-19 cases are declining
Acer starts the year off strong with the Aspire Vero National Geographic Edition
Duterte praises military but slams police for poor discipline, corruption
Over 3 Million worth of prizes to be won at Smart Padala’s SENDali Manalo Promo!
COVID-19 cases surging in all regions and provinces, says DOH
The best of bayside and city living at SMDC’s Sail Residences
MOST READ
Marcos Jr. visits Cebu, stands as ‘ninong’ to mayor’s son
Duterte praises military but slams police for poor discipline, corruption
Djokovic has to comply with rules to go to Spain, PM says
Comelec junks petition to scrap Bongbong Marcos COC
Follow @KAguilarINQ on Twitter
Don't miss out on the latest news and information.