Bea Alonzo is set to star alongside fellow actors Angelica Panganiban and Richard Gutierrez in an upcoming movie.

Filmmaker Mae Cruz-Alviar will be helming the project, as per production company Star Cinema’s post on Instagram last Saturday, July 20.

During the film’s story conference, Cruz-Alviar said the movie will center on friendship that will be tested by marriages, as per Star Cinema on the same day.

Raymond Gutierrez, twin brother of Richard, expressed his support for his brother and his co-stars, as seen in a photo Alonzo shared on Instagram Stories yesterday, July 21. “Excited for this one,” he said. 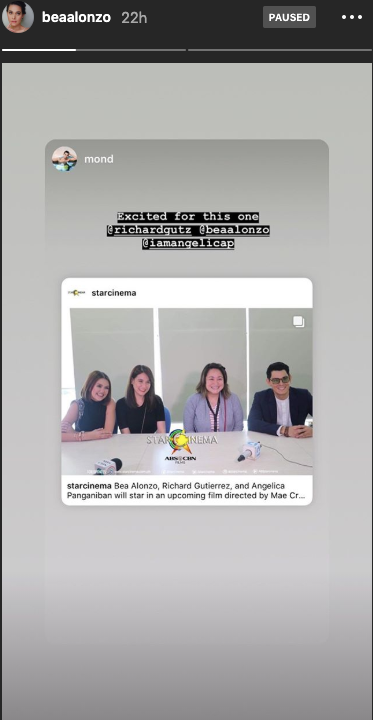 Alonzo’s latest appearance on the silver screen was when she starred in the 2019 horror film “Eerie”. Meanwhile, Gutierrez and Panganiban last top-billed the 2018 fantasy comedy film “Fantastica” and the 2018 romantic drama “Exes Baggage”, respectively.

This upcoming film will also be Cruz-Alviar’s return to directing after taking a break for almost two years. She last directed the 2017 romantic comedy “Can’t Help Falling in Love”, which starred Daniel Padilla and Kathryn Bernardo. JB