MANILA, Philippines – Marjorie Barretto is planning to take legal action against an Instagram user who posted a photo of her daughter, actress Julia Barretto and actor Gerald Anderson.

“Yes, I will,” Marjorie replied to a netizen on Monday who suggested she take legal action against the person who shared the now-viral photo.

Marjorie also chided a netizen who suggested she take action against all the women who are taking the side of actress Bea Alonzo, Anderson’s girlfriend.

“Ikaw yata ang naloko nila. Based on a harmless photo, naging mangaagaw na si Julia? You’re so affected. The person who is circulating that is even hiding under a dummy account. You mean that person has more credibility?” Marjorie said. 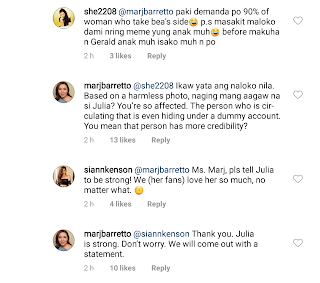 She also thanked Julia’s fans for their support and assured they will release a statement soon.

This was after a netizen posted photos of Julia and Anderson supposedly taken at the birthday party of fellow actor Rayver Cruz. /gsg