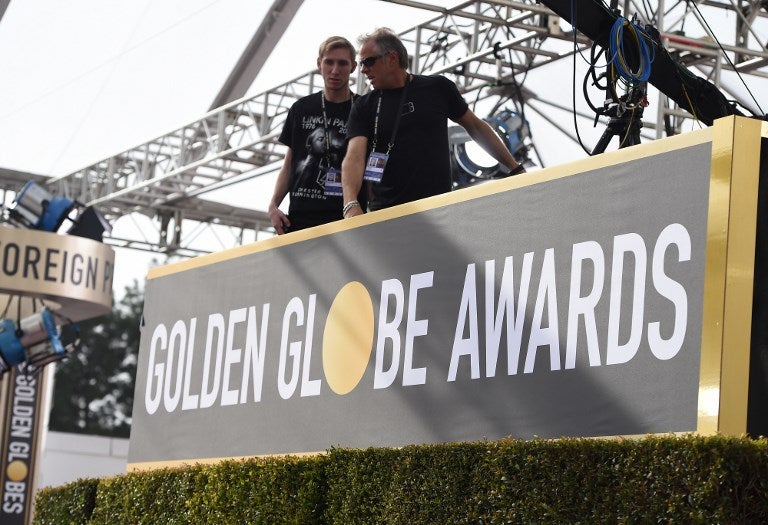 Preparations are underway at the Beverly Hilton Hotel on Jan. 6, 2018 in Beverly Hills, California for the 75th Annual Golden Globe Awards which will take place Jan. 7, 2018. Image: AFP/Robyn Beck

The Golden Globe Awards ceremony takes place on Jan. 6, and the Academy unveils its Oscar nominations on Jan. 22. Alongside those, expect Oscar predictions to heat up and increase in accuracy following awards ceremonies from four key guilds representing film producers, actors, editors, and reviewers.

Golden Globe Awards, 76th
Jan. 6, 2019
Hosted by the Hollywood Foreign Press Association, and a prestigious combined film and TV event. For Oscar watchers, the Globes’ leading actor, actress and supporting actor awards for film dramas tend to line up with Academy Award winners. Biopics “Vice”, “The Favourite”, “Green Book” and pop star drama “A Star Is Born” lead film nominations; ” The Assassination of Gianni Versace: American Crime Story” is a nose ahead on the TV side.

Critics’ Choice Awards
Jan. 13, 2019
With a membership larger than that of the Globes’ HFPA, the Broadcast Film Critics Association has this year put forward regal loyalty drama “The Favourite” in 14 wide-ranging categories and “Black Panther” in 12. Both are part of a ten-film set put forward for Best Picture. Despite the apparently distinct voter base, the CCAs have proven particularly adept at predicting the Oscars’ best director, actor, supporting actress and best film awards, in that order.

Producers Guild of America Awards
Jan. 19, 2019
A very strong predictor of the Academy Awards’ Best Picture Oscar (which is awarded to a film’s team of producers). Only the Directors Guild of America has a better track record. Nominees are announced on Jan. 4.

Academy Awards, 91st – nominations
Jan. 22, 2019
It was too soon for the Best Popular Film, a new category proposed and then withdrawn in August and September of 2018; still, talk is that Marvel’s “Black Panther” is being pushed for nods in prestige non-technical categories. The ceremony itself takes place on Feb. 24, 2019.

Screen Actors Guild Awards
Jan. 27, 2019
Rivaling the Oscars for glitz and glamour as top-flight actors and actresses gather. This year, “A Star is Born” is in the running for actor, actress, supporting actor and ensemble awards, while “The Favourite” and “BlacKkKlansman” have three nominations each. TV shows “Ozark” and “The Marvelous Mrs. Maisel” are among those expected to win small-screen SAGs. JB