Aiko Melendez on MMFF award: ‘A great comeback for me’ 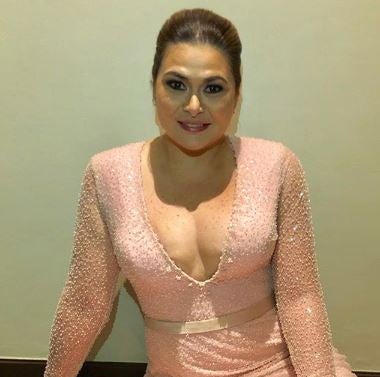 Aiko Melendez was over the moon after she won as Best Supporting Actress at the Metro Manila Film Festival “Gabi ng Parangal” held on Thursday, Dec. 27. Melendez starred in Joel Lamangan’s LGBT-themed drama “Rainbow’s Sunset,” which bagged most of the awards during the ceremony.

The elated Melendez took to social media on Dec. 28, expressing her gratitude to the film festival and the jurors. In her post, Melendez can be seen sitting on the floor in a blush pink low-cut beaded gown as she posed with her award.

For Melendez, winning the award was a great way to cap the year 2018 and she could not be any more grateful to God for the blessing. She also thanked her children, Andre and Marthena, who she called her “inspiration.

“A great way to end 2018! Thank you Lord Jesus for this wonderful gift. To my family I share this recognition to all of you! My kids @andreyllanaa and @jickainmarthena I share this to you both! You are my inspiration.”

She also did not miss thanking the people behind the film, such as producers Harlene Bautista, Hero Bautista, Dennis Evangelista and Ferdy Lapus, and director Lamangan. She, too, singled out boyfriend Subic Mayor Jay Khonghun—her No. 1 critic and fan.

“To my ever supportive boyfriend @jaykhonghun who also took this picture, thank you! You are my number 1 critic and my number 1 fan,” she said. “Our partnership is indeed a lucky one. So many good things happening. God has blessed me with you and my kids! I will definitely keep you guys in my heart! Etched for the rest of my life. You are all my rainbow’s sunset.”

Melendez may have won Best Supporting Actress in this year’s Metro Manila Film Festival, but it is safe to say the biggest win for her are the people in her life.  /ra

Aiko Melendez to bashers of her relationship with Subic mayor: ‘Eat your hearts out’