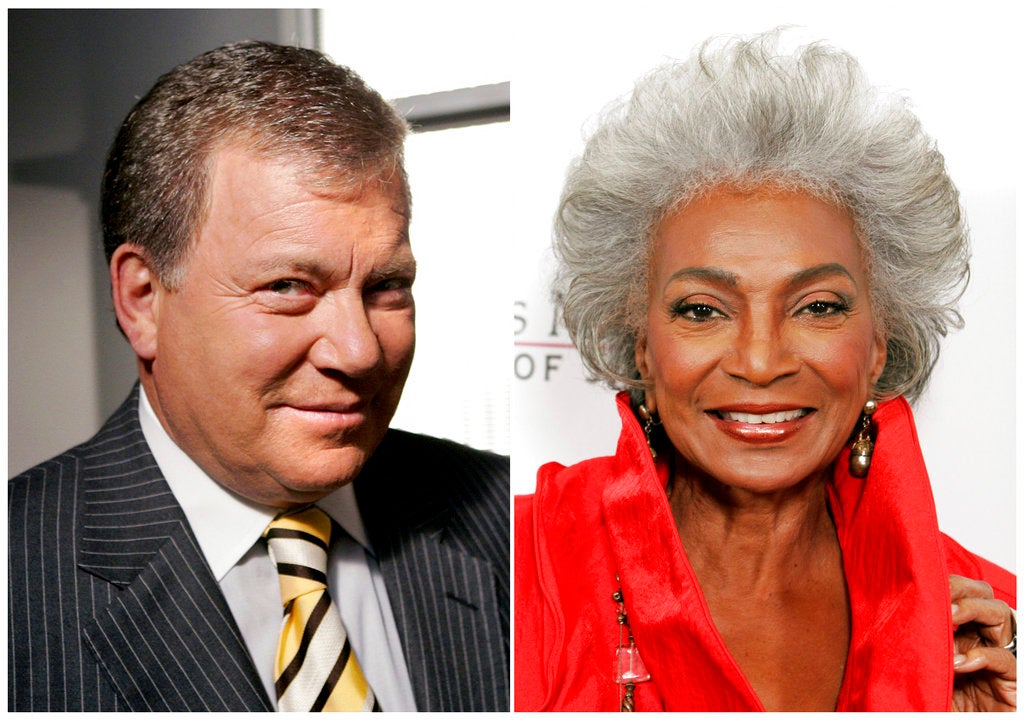 WASHINGTON (AP) — It was the kiss heard around the galaxy.

Fifty years ago — and only one year after the U.S. Supreme Court declared interracial marriage was legal — two of science fiction’s most enduring characters, Captain James T. Kirk and Lieutenant Nyota Uhura, kissed each other on “Star Trek.”

It wasn’t romantic. Sadistic, humanlike aliens forced the dashing white captain to lock lips with the beautiful black communications officer. But the kiss between actors William Shatner and Nichelle Nichols in “Plato’s Stepchildren” would help change attitudes in America about what was allowed to be shown on TV and made an early statement about the coming acceptance of interracial relationships in a United States still struggling with racism and civil rights.

The kiss between Uhura and Kirk “suggested that there was a future where these issues were not such a big deal,” said Eric Deggans, national television critic for National Public Radio. “The characters themselves were not freaking out because a black woman was kissing a white man … In this utopian-like future, we solved this issue. We’re beyond it. That was a wonderful message to send.”

“Plato’s Stepchildren,” which first aired on Nov. 22, 1968, came before Star Trek morphed into a cultural phenomenon. The show’s producers, meanwhile, were concerned about one of the main episode elements: Humanlike aliens dressed as ancient Greeks that torture the crew with their telekinetic powers and force the two USS Enterprise crew members to kiss.

Worried about reaction from Southern television stations, showrunners filmed the kiss between Shatner and Nichols — their lips are mostly obscured by the back of Nichols’ head — and wanted to film a second where it happened off-screen. But Nichols said in her book, “Beyond Uhura: Star Trek and Other Memories,” that she and Shatner deliberately flubbed lines to force the original take to be used.

Despite concerns from executives, “Plato’s Stepchildren” aired without blowback. In fact, it got the most “fan mail that Paramount had ever gotten on Star Trek for one episode,” Nichols said in a 2010 interview with the Archive of American Television.

Officials at Paramount, the show’s producer, “were just simply amazed and people have talked about it ever since,” said Nichols.

While inside the show things were buzzing, the episode passed by the general public and the TV industry at that time almost without comment, said Robert Thompson, a Syracuse University professor of television and popular culture.

This was a world where interracial marriage had just become legal nationwide.

In 1967, the year before “Plato’s Stepchildren” aired, the Supreme Court struck down nationwide laws that made marriage illegal between blacks and whites, between whites and Native Americans, Filipinos, Asians and, in some states, “all non-whites.”

Most television — outside of the news — was escapist fare and not willing to deal with the raucous atmosphere in the 1960s, Thompson said.

“It was so hard for television in the 60s to talk about the 1960s,” he said. “That kiss and that episode of Star Trek is an example of how every now and again television in that period tried to kick the door open to those kinds of representations.”

Gene Roddenberry, Star Trek’s creator, and his team had more leeway because he was writing about the future and not current life, experts said.

“Setting Star Trek three hundred years in the future allowed (Roddenberry) to focus on the social issues of the 1960s without being direct or obvious,” Shatner said in his book “Leonard: My Fifty-Year Friendship with a Remarkable Man.”

A later episode entitled “Let That Be Your Last Battlefield” highlighted the folly of racism by showing a generations-long battle between two people from the same planet who thought each other to be subhuman – one was black-skinned on the left side and white on the right, while the other was the opposite.

Throughout the ensuing decades, interracial relationships with black and white actors became more prevalent on television, spanning multiple genres. From comedies like “The Jeffersons” and “Happy Endings,” to dramas such as “Parenthood,” ”Six Feet Under” and “Dynasty,” and back to sci-fi with the short-lived “Firefly.”

The trend is still not without its detractors. In 2013, a Cheerios commercial featuring an interracial couple and their daughter drew thousands of racist comments online.

Historians have noted that interracial kisses between blacks and whites happened on British television during live plays as early as 1959, and on subsequent soap operas like “Emergency Ward 10.”

In the U.S., interethnic kisses happened on “I Love Lucy” between the Cuban Desi Arnaz and the white Lucille Ball in the 1950s and even on Star Trek in 1967 with Mexican actor Ricardo Montalban kissing Madlyn Rhue in the “Space Seed” episode.

Other shows like “Adventures in Paradise” and “I Spy” featured kisses between white male actors and Asian actresses, and Sammy Davis Jr. kissed Nancy Sinatra on the cheek on a December 1967 episode of her televised special “Movin’ with Nancy.”

“For whatever reason, that one between Captain Kirk and Lieutenant Uhura seems to be the one that is marked as the milestone,” Thompson said.

It stands out because it had a profound effect on viewers, Nichols said in 2010.