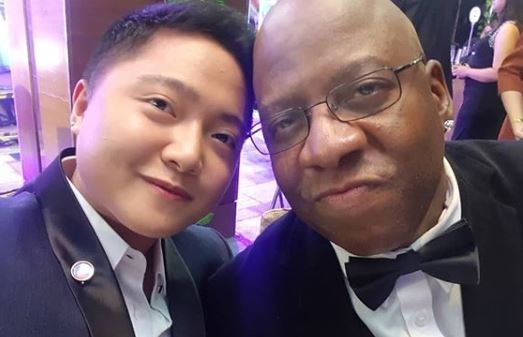 Jake Zyrus is no stranger to the international scene. In years past, he  performed and collaborated with many giants including the likes of Celine Dion, Mariah Carey, Andrea Bocelli, Josh Groban and Michael Bublé. He has also worked with international singer-songwriter Iyaz for his hit single “Pyramid” and crossed over from singing to acting in a recurring role in American musical television series “Glee.”

It is not surprising, then, that he is set to work with another esteemed artist, this time American R&B singer-songwriter and record producer Keith Martin, who is a “legend” in Zyrus’ eyes.

Zyrus took to Instagram last Nov. 16 to share a picture he took with the “Because of You” artist in what appears to be a formal event. Zyrus kept his words to a minimum, as he shared to his fans that a collaboration between him and Martin was in the works.

“I smell a collaboration,” quipped Zyrus. “It was really nice seeing this legend. Thank you for your wisdom and kind words. @keithmartinmusic.”

Martin, on his end, seemed just as excited and thrilled as he took to his own Instagram to rave about connecting with Zyrus once again.

“SO GLAD TO CONNECT WITH AN OLD FRIEND TODAY JAKE [ZYRUS],” wrote Martin on the same day. “AND YES WE ARE GOING TO DO WORK WOOHOO WATCH OUT!”

SO GLAD TO CONNECT WITH AN OLD FRIEND TODAY JAKE CYRUS AND YES WE ARE GOING TO DO WORK WOOHOO WATCH OUT!

Despite the revelation, however, much remains to be speculated as Zyrus and Martin chose not to reveal any more details about their collaboration, leaving their most fervent of fans on their toes, eyes peeled and ears to the ground.  /ra

How Jake Zyrus copes with his deepened voice