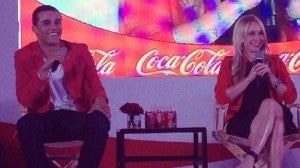 “Charice & Jessica are some of the best vocalists we’ve had on the show,” said Jacob Artist shown here with co-star Becca Tobin. INQUIRER Lifestyle Instagram photo

The campaign, punctuated by the tagline “Ito Na!” is supposed to celebrate happiness, positivity and “this is it” moments.

The “Glee” stars were unanimous in recalling their favorite “Ito Na!” moments— landing their coveted roles on the popular TV show.

They said they were overwhelmed by the enthusiastic welcome of their Filipino fans. “This is actually my very first time overseas,” said Benoist, who plays Marley Rose (aka “new Rachel”).

“The Filipino fans who tweet us are so happy, enthusiastic and all positive. They never threaten me,” said Tobin. Tobin plays mean girl cheerleader Kitty Wilde, but her cheerful and gracious off-camera self is her character’s complete opposite.

“I find that if I wake up in the morning and start the day really happy, I can spread that to the people I come in contact with.”

“Being here, with you guys, that’s my happiness,” said Artist, who plays Jake Puckerman.

When asked what the actors were looking forward to most during their Manila visit, the two boys said in unison: “The food.” Artist said he was excited to eat at Jollibee. When prodded whether they were going to try the infamous balut, Artist replied: “Duck embryos? Bring it on! Ito na!”

The four had nothing but raves for the two guest stars. “They are so unbelievably talented, it’s crazy. Charice and Jessica Sanchez are two of the best vocalists the show’s ever had,” said Artist.

Being a show that deals with underdogs and the constant struggle to be accepted for each other’s differences, the foursome had nothing but encouraging words for Charice and her recent coming out. “She’s just amazing and incredible,” said Benoist.

As the press conference wrapped up, the audience egged on the stars to sing. The group then harmonized on a few lines of the Spice Girls’ “Wannabe.”

Search Twitter for hashtags #itona and #gleeforcoke for more photos of the “Glee” stars.