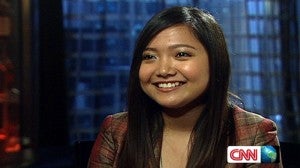 MANILA, Philippines—The life story of 19-year-old international singing sensation Charice Pempengco keeps on touching the hearts of people from all walks of life all over the world.

In a tell-all interview with CNN’s “Talk Asia,” Charice shares her turbulent childhood mired in poverty, her rise to fame and how she copes with what could be likened to a modern fairy tale.

“You are a force to be reckoned with. That voice comes from something bigger than yourself,” Oprah Winfrey once said of the 19-year-old singer.

When it comes to Charice, there are many “firsts” and most recent is her having about 77 million You Tube hits. Second, she is the first Asian singer in history to rank in the Top 10 of “Billboard 200” in 2010.

Charice’s rise to fame began when a fan posted her videos via You Tube that was noticed by Ellen De Generes.  She was invited by De Generes to sing in her show live. Oprah Winfrey took notice and got her also into her show.

Life was not the same for her ever since.

She was invited by Grammy-winning producer David Foster to perform on his “David Foster and Friends PBS Show” in Las Vegas. Here, she was given the most-coveted opportunity to perform with other talents produced by Foster like Michael Bublé, Celine Dion, Andrea Bocelli and Josh Groban.

Up to now Charice is still in awe of her fate.

“Yes. Yes I still get overwhelmed. It happened so fast but at the same time I worked hard for it and I’m still working hard for it,” Charice said in an interview with CNN’s “Talk Asia.”

Life wasn’t so kind to Charice during her childhood years but it motivated her to help her mother through her singing.

“By the age of six I was cooking rice and some stuff for my little brother. I was giving him the milk and everything. Every time I did all the singing contests and it was horrible. You start from 10 p.m. and you finish at 7 a.m. and I had to go to school. She used to cry and she told me to stop and I said “no” because that was the only way we could get a lot of money from it. I really sacrificed everything but at the same time it felt great and it was worth it. Seeing my mom’s face every time I won made me feel great,” she told CNN correspondent Anna Coren.

Charice’s father abandoned her family when she was only three years old but the events in her life molded her to become what she is today.

“Well it was really a tough life, not really easy. My mom’s a single mom and she used to be my vocal coach and I really admire her. She’s definitely my inspiration and I look up to her a lot. I mean, I decided to be a singer because of her. It was a tough life before but now this whole thing that happened to me really helped me a lot.”

Only recently, her estranged father was stabbed dead in a drunken street fight in San Pedro, Laguna. What followed was a heart-breaking reunion of the family.

Prior to this, she mentioned how she missed her father over the years.

Her interview with “CNN Talk Asia” happened weeks before her father’s death and even back then Charice did not speak ill of her father. She was in tears when asked if she missed him.

“I actually don’t know. I don’t know. Maybe sometimes when I see some kids with their families. Sorry I keep crying. Maybe when I ask them sometimes, how does it feel to have a dad? And you know they tell me these great answers and sometimes I wish my dad is here. Maybe I do, sometimes. But at the same time, I don’t because of what happened. It’s hard. It’s really hard,” she said.