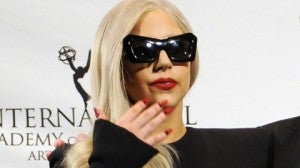 LOS ANGELES—Eccentric “Bad Romance” songstress Lady Gaga says she has an “inability to know what happiness feels like with a man,” in typically outspoken comments accompanying a nude magazine photospread.

Gaga posed for a series of trademark Annie Leibovitz pictures on the cover and inside pages of the latest edition of Vanity Fair — including one shot of her naked, being painted by veteran crooner Tony Bennett.

“I have never felt truly cherished by a lover. I have an inability to know what happiness feels like with a man,” she told the magazine, suggesting she might be destined to be a single Lady forever.

And she added: “I say this honestly, and this is my new thing as of the past year: when I fight with someone I’m in a relationship with, I think, ‘What would my fans think if they knew this was happening?’

“How would they feel about my work and about me as a female if they knew I was allowing this to go on?’ And then I get out,” she said.

Gaga — who was due to appear Wednesday night at the annual Grammys nomination show in Los Angeles — appears in a lavish red two-piece and over-sized hat on the front of the magazine.

Inside pictures include her washing furs in a laundromat, eating at a hot dog stand dressed in a vast golden dress — and a shot of her naked, posing on a rug with her back arched for Bennett, in an artist’s studio.

She says her relationships tend to follow a same destructive pattern, especially if her partner is as creative as she is.

“It starts out good,” she says. “Then when I’m in these relationships with people who are also creative, or creative in their own way, what happens is the attraction is initially there and it’s all unicorns and rainbows.

“And then they hate me… If I go to the piano and write a quick song and play it back, they are angry with how fast and effortless it is. That’s who I am, and I don’t apologize for it.”

She added that sometimes she feels she is destined to be lonely. “I had a man say to me, ‘You will die alone in a house bigger than you know, with all your money and hit records, and you will die alone’.”