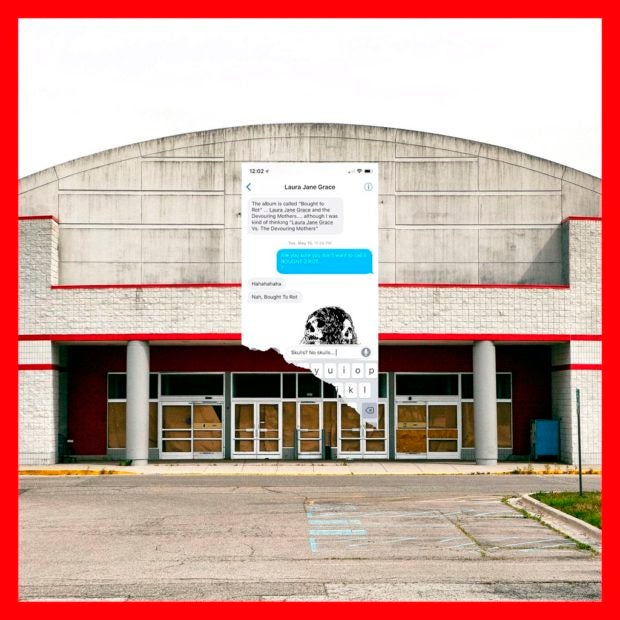 The words just tumble out of Laura Jane Grace on her new album, a torrent of thoughts, observations and memories from one of rock’s most charismatic figures.

The Against Me! singer and guitarist has taken a break from her superb punk band to explore more glam-rock terrain with the side project Laura Jane Grace & the Devouring Mothers.

Her lyrics are barely contained by the structure of the songs, bellowed one moment or stretched into sing-talk poetry. One song, “Manic Depression,” has 250 words, another has 240 and a third has 230.

“Bought to Rot” is less heavy than previous Against Me! offerings, with some songs that could easily fit on mainstream alt-rock radio. It’s also less angry, more theatrical and more surreal. (Many of the songs feel in the vein of “Hedwig and the Angry Inch.”) It’s a dizzying, sometimes hysterical, sometimes heartbreaking, but always deeply personal album.

It kicks off with the claustrophobic “China Beach,” with Grace seemingly jarred awake and confused: “Are you my enemy and are we at war?” she asks. “Are you the hunter? Am I the prey?”

Grace, whose life and career changed dramatically when she came out as a transgender woman in 2012, has teamed up in the new band with Against Me! drummer Atom Willard and Against Me! producer Marc Jacob Hudson on bass.

The album’s lyrics explore everything from love gone bad to mental illness, with a sense of rootlessness throughout — two songs have Grace in hotels and one in an airplane. “Infinite distance, eternal displacement,” she sings on “Born in Black.”

Fans of the Windy City may want to turn down song No. 8, titled “I Hate Chicago.” It’s an expletive-laced stew of angst toward America’s third-largest city, with Grace complaining about everything in her hometown from the food (“Learn how to make a pizza”) to sports (“I hate the Cubs, the Sox, the Blackhawks and the Bulls”) to its citizens (“You and all your self-righteous hipster hoods can go to hell.”) It’s seething and frenetic and wildly funny.

Other standouts include the R.E.M.-reminiscent “Apocalypse Now (& Later),” the Lou Reed-ish tunes “Amsterdam Hotel Room” and “Manic Depression,” and the David Bowie-adjacent “Screamy Dreamy.” There’s electricity in every song and an abrasive unpredictability throughout. You can’t ask for more — if you live outside Chicago. MKH

Florence and the Machine looks back with regret, hope—review

Filipino-Americans ‘fired up’ as Tagalog added to Nevada ballot