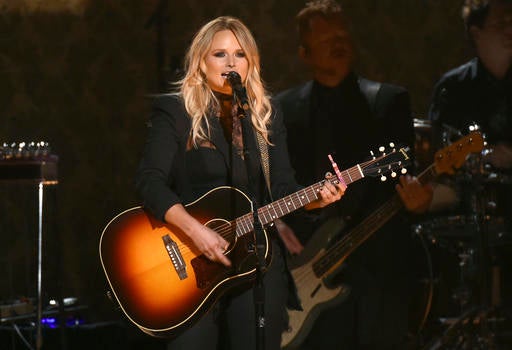 In this Nov. 2, 2016 file photo, Miranda Lambert performs “Vice” at the 50th annual CMA Awards at the Bridgestone Arena in Nashville, Tenn. Double albums are rare these days and the best ones came out decades ago in vinyl form. Lambert revives that tradition in an expansive new album, “The Weight of These Wings,” which emphasizes the duality of her personality on disc A’s “The Nerve” and disc B’s “The Heart.” AP

Miranda Lambert, “The Weight of These Wings” (RCA Nashville)

Double albums are rare these days and the best ones came out decades ago in vinyl form. But country star Miranda Lambert revives that tradition in an expansive new album, “The Weight of These Wings,” which emphasizes the duality of her personality on disc A’s “The Nerve” and disc B’s “The Heart.” At times, the album feels a bit repetitive, but there are enough standout songs to make it worth the extra time.

The fiery guitar slinger from Texas highlights her rock side with a touch of distortion, echoing vocals and high-pitched guitar licks. First single “Vice” starts with the crackle of a record and her voice drips like a smoky dive bar singer as the bass line wavers.

She embodies the highway drifter trying to outrun her heartache on songs like “Runnin’ Just In Case,” but argues that it’s the journey that makes her stronger. “Happiness isn’t prison, but there’s freedom in a broken heart,” she sings on the album, her first record since her 2015 divorce to country star Blake Shelton after four years of marriage. She kicks up her heels with a little well-crafted lyrical levity on songs like “Pink Sunglasses” and “Highway Vagabond.”

The other Lambert we’ve all come to love is the heart-on-her-sleeve songwriter, who helped write 20 of the 24 songs. She creates a country classic in the waltzy “To Learn Her,” and she lets herself be timid with a new love on “Pushing Time,” a beautiful duet with her boyfriend Anderson East.

She seems to speak to her own legacy as an artist with “Keeper of the Flame,” a passionate anthem for blazing ahead to be a light for others.

Although releasing a double album in the reign of digital singles is likely a gamble, Lambert has a lot to say and there’s plenty of fans ready to listen. TVJ