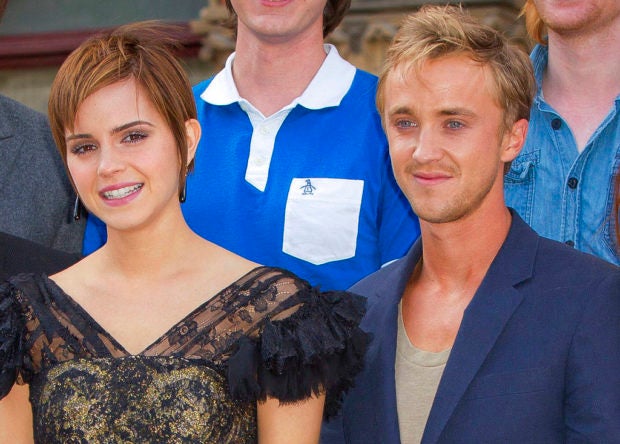 In this July 6, 2011 file photo, actors, from left, Emma Watson and Tom Felton pose at St Pancras Renaissance Hotel in central London. “Harry Potter” co-stars Emma Watson and Tom Felton went for a ride on a skateboard. Watson posted a short video on Instagram. Felton cautioned Watson, “Easy with the waddling. Keep your feet still.” She laughed and said they were. He then said, “You’re dancing around the board like a clown. Hang on tight.” Watson wrote a post congratulating Fenton on his new Youtube sci-fi series, “Origin,” which premieres on Nov. 14, 2018. Image: AP Photo/Joel Ryan

LOS ANGELES — There were no brooms in the air or “Mudblood” insults when Hermione Granger and Draco Malfoy met up at a beach.

Watson posted a short video of their meetup on Instagram.

FEATURED STORIES
ENTERTAINMENT
Ria Atayde on claim that Arjo was ‘friendzoned’ by Maine Mendoza: ‘Hala, epal’
ENTERTAINMENT
Bela Padilla on being tagged a Diehard Duterte Supporter: ‘Nope, not at all’
ENTERTAINMENT
Pokwang on being crowned Miss Universe 2001 by Wikipedia: ‘Tawang tawa ako’
View this post on Instagram

Felton teased Watson about her skateboarding skills, telling her she was “dancing around the board like a clown.”

Read Next
Laura Jane Grace goes on a thrilling sonic side road — a review
EDITORS' PICK
WHO: Indoor airborne spread of coronavirus possible
Water remains our saving grace right now
Motostrada expands by handing over ‘Trident’ and adding new ‘Horseman’ to its growing business
No arrests to be made on 1st day of allowed pillion riding for couples — HPG
House panel set to meet for possible decision on ABS-CBN franchise bid
Digital hunt for Hyun Bin: 5 challenges for Smartees
MOST READ
‘I will always speak up for you’: Server on defending Fil-Am family from racist rant
‘Nouveau’: Agot Isidro hits Jinkee Pacquaio’s show of luxury Hermes, Louis Vuitton bikes
Alfred Vargas inhibits from voting on ABS-CBN franchise renewal
Solon withdraws support for ABS-CBN franchise renewal
Don't miss out on the latest news and information.