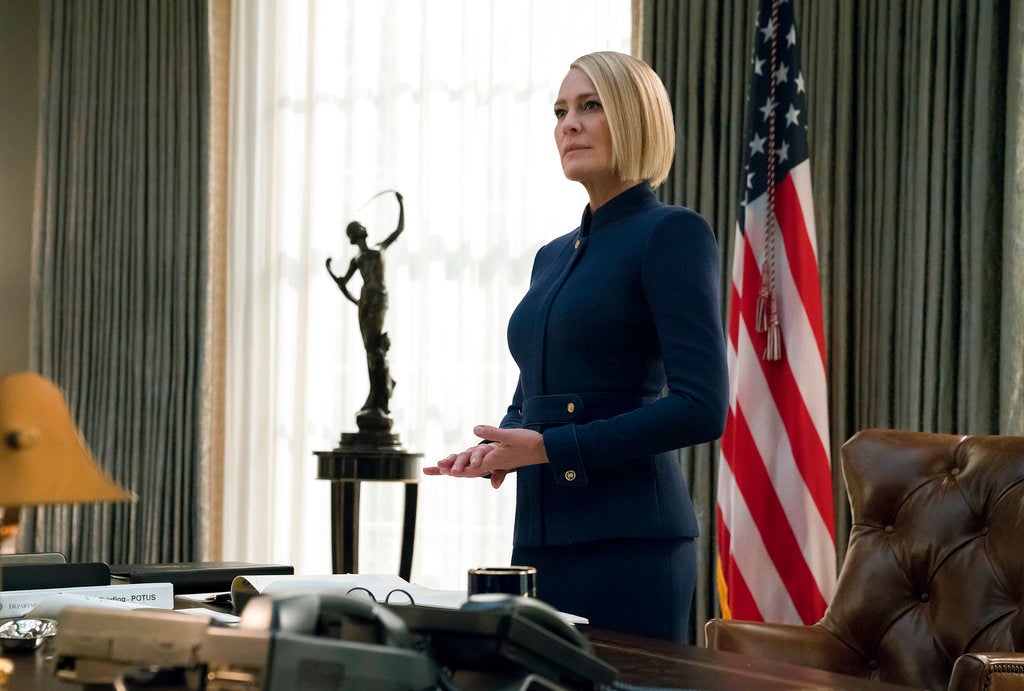 This image released by Netflix shows Robin Wright in a scene from the final season of “House Of Cards.” Image: David Giesbrecht / Netflix via AP

LOS ANGELES (AP) — The spirit of Francis Underwood and misdeeds past haunt the sixth season of “House of Cards” and its new U.S. president, the widowed Claire Underwood.

Francis is very much dead when the Netflix series opens its final, eight-episode run Friday, as an image of Claire bending tenderly over his coffin makes clear.

But there’s no suggestion from the producers or cast that killing off Francis — after the Me Too-triggered firing of star Kevin Spacey — took a storytelling toll on Netflix’s political satire. It’s following the path of Claire’s rise signaled at the end of season five, this despite the upheaval that halted production a year ago when Spacey was accused of sexual misconduct.

“Ultimately, the only response that we could have was the one that we had,” said executive producer Frank Pugliese. “Which is the cast and crew and everyone involved decided to put their heads down and respond by telling the best story that we possibly could. It was the only way that we could answer anything, any circumstance.”

At least 24 men have accused Spacey, a two-time Oscar winner and a five-time Emmy nominee for his portrayal of Francis, of sexual misconduct or assault. In response to the first claim, from an actor who alleged that Spacey made inappropriate advances toward him when he was 14, Spacey said he didn’t recall the alleged encounter but said it would have been “deeply inappropriate drunken behavior.”

Robin Wright, now flying solo as Claire, says it required a group effort to rebound after losing Spacey and his character.

“We all really collaborated well and wanted the best for the show. So I think it was a reunion of, ‘Come on, let’s pull up our bootstraps and forge ahead,'” said Wright, who declined to comment on whether Spacey was missed on set (Wright has also received five Emmy nominations for her work on the show).

When Netflix and the studio OK’d the show’s resumption without him, it avoided an unresolved end for the drama that put Netflix on the map as a destination for original fare. “House of Cards” also heralded the rise of streaming platforms and more such acclaimed shows, including Netflix’s “Orange Is the New Black” and Hulu’s “The Handmaid’s Tale.”

That Francis would be gone but not forgotten was inevitable, said Pugliese: “To deny the weight or the importance of Francis Underwood, you can’t do it so easily. It was such a big part of the story for so many seasons, and at the core of whatever Claire is going through and whatever the series is about.”

Last season ended with Francis out of the Oval Office and Vice President Claire Underwood in, wielding both power and Francis’ direct pipeline to viewers through the camera. “My turn,” she told the audience. What preceded it was her husband “basically telling her that he was going to be controlling her presidency from behind the scenes,” said executive producer Melissa James Gibson.

“It was clear at the end of season five that no matter what, season six was going to be an exploration of who owns the White House,” said Pugliese.

Added James Gibson: “Who owns the White House, who owns the narrative. And those things continue to be true. She’s just grappling with them in a different way, and not just with the legacy of Francis but also the characters to whom he made promises.”

The final season begins with Claire ready for battle, as demonstrated by her military-inspired fashion choices and steely demeanor. When told insults and claims of intended violence are flooding in against the first female president, she insists on hearing the ugly details.

“Lots of threats involving the c-word, ma’am. Lots and lots of the c-word, unfortunately,” she’s told.

But there’s more afoot than misogyny, starting with an eerie tapping coming from the walls of the White House. There’s also something found on Francis’ former bed that, although it falls short of the bloody horse’s head of “The Godfather,” has its own menacing shock value.

Claire’s frenemies include the billionaire brother-and-sister power team Annette and Bill Shepherd (Diane Lane, Greg Kinner). They expect her to toe the policy line they dictate and abandon any post-Francis illusions of independence. The new president has other ideas.

And there’s staunch Francis loyalist and fixer Doug Stamper, who took the fall for a murder Francis committed and is awaiting his fate, psychiatric and legal.

“This is obviously the biggest thing he’s had to deal with,” said Michael Kelly, who plays Stamper. “At the beginning of season six, you see for the first time an incredibly lost man.”

Whether he finds himself in the post-Francis Underwood world remains to be seen. That is not an issue for the show itself, say its makers.

Pugliese said Francis’ absence “provided an opportunity” to see what characters fill the void as Claire’s rival or ally or both, while James Gibson calls it a chance for the new president to “explore bargains, compromises, how she arrived where she is.”

“Claire’s a complicated figure,” she said. “That was really important to us, that she got to be just as contradictory and layered and complex and as much of an anti-hero as her dead husband.” AB