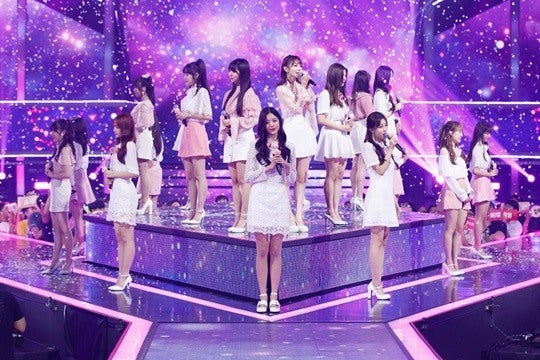 Japanese-Korean project group IZ*ONE, made up of the 12 finalists of Mnet’s competition show “Produce 48”, is set to debut in October, K-Pop Herald reports.

A collaboration between Mnet series Produce 101 and the Japanese pop idol group AKB48, 98 trainees from both Japan and South Korea competed against one another to make it to the final 12. The final lineup will debut as a girl group which will actively perform in both countries.

The group members were spotted on Tuesday at Incheon Airport in Korea, on their way to Japan, to carry out their first official duties. IZ*ONE will engage in promotional activities and prepare for its planned debut.

The group’s name refers to how the 12 female members became a group with the support of global fans. It is the first Korean-Japanese group formed through an audition program, which invited 96 contestants, including members from the J-pop group AKB48 and its sister groups.

The group is set to run for two and a half years, longer than the official activity periods of previous project groups, I.O.I and Wanna One. JB

Watch IZ*ONE’s journey prior to their debut on Viu! Just text VIU ON 99 to 2948 for Globe and TM subscribers. Upgrade now to Viu Premium to experience unlimited download offline, eight hours after the Korean telecast and HD viewing.