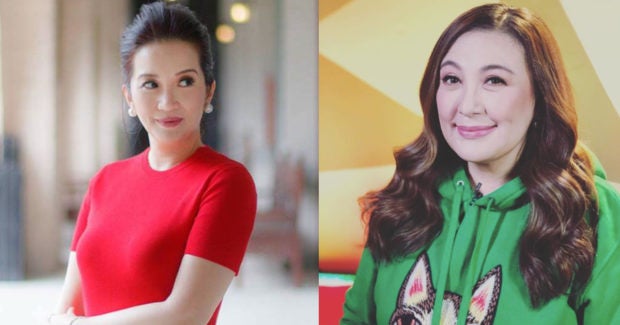 “Queen of All Media” Kris Aquino sure knows how to show her love to those dearest to her in the most intricate fashion. Aquino may be thousands of miles away in Hawaii, but she made sure her “ate,” “Megastar” Sharon Cuneta and husband Senator Kiko Pangilinan received her elaborate gift, although a bit late.

It was Cuneta who took to her Instagram on Sept. 3 to share the thoughtful gift Aquino sent their way: huge balloon arrangements for her and Pangilinan, personalized with a heartfelt letter written by Aquino herself. Pangilinan marked his 55th birthday last Aug. 24, so it was only apt that he received blue birthday balloons from Aquino. Cuneta, meanwhile, got a pink balloon arrangement that bore expressions of gratitude from Aquino.

“Yesterday Kiko and I each received a huge balloon arrangement from Kris. They and especially her message made our day!” gushed Cuneta as she showed pictures of the balloons and Aquino’s message.

“I didn’t even know she was still in Hawaii but it’s just like Kris to not delay anything, especially if it is to show those she cares about how special they are to her.”

Cuneta was ever grateful to Aquino, whom she endearingly called “Beej” — short for “baby girl.”

“Thank you, Beej! And you are most welcome. Make the most of your vacation and rest well, because there is like a ton of blessings waiting for your attention when you come home! Lots of love always!!!”

Meanwhile, Aquino had separate messages for Cuneta and Pangilinan. In her letter to Cuneta, Aquino wrote that she was forever grateful for the “generous kindness and infinitely valuable insights” Cuneta had shared to her.

“Thank you for taking me under your wing & giving me the protective shield of a loving Ate,” wrote Aquino. “You are special because your heart makes all those you allow inside feel they are home.”

On the other hand, Aquino showed her support to Pangilinan for his being a statesman and parent, and especially for making the country a better place for their children.

Aquino wrote, “Sen. Kiko — like you — I do believe that those of us who have the voice and means to make the Philippines a more stable economy for our children — we must embrace that opportunity because nobody can better understand their needs than us parents. Happy Birthday!”

This isn’t the first time Aquino has shown her love for Cuneta through elaborate gifts. Aquino had given Cuneta a pick-me-up gift in the form of fur Gucci loafers and a Gucci “Marmont” velvet bag after a heart-to-heart talk. This was after Cuneta, in the same way, gifted Aquino an Oscar de la Renta wool sweater.

Cuneta, too, has stood up for Aquino in the past. Last month, Cuneta took to social media to defend Aquino’s role in the box office hit “Crazy Rich Asians.”  In her post, Cuneta wrote that Aquino’s appearance in the Hollywood film opened opportunities not just for Filipinos but other Asians in world cinema.

“It opens more doors in world cinema for Filipinos and other Asians, like Ms. Lea Salonga opened doors for many in Broadway,” Cuneta wrote then. “A short — but important — exposure in a film like this should’ve made us all root for Kris.”  /ra