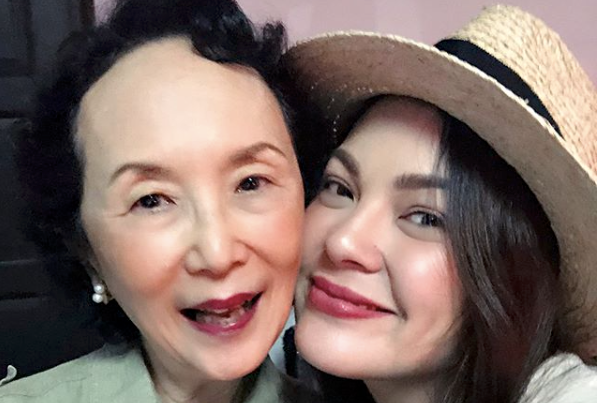 Anybody probably has one person from their childhood whose memory just never seems to get hazy despite the passing of the years. For KC Concepcion, the memory of her guidance counselor is one that never eluded her, especially since her counselor was a legend who moved the lives of many students.

“Reunited with our beloved counselor from #InternationalSchooManila!” Concepcion wrote on her Instagram last July 21. “A legend & icon who has touched so many lives, Mrs. Vicky Herrera.”

In her post, Concepcion can be seen posing for a picture with Herrera. The two are standing in a room covered with pictures, letters, and other special mementos from students which Herrera has gathered over the years. Concepcion shared that it had been 15 years since her secondary school days, a circumstance that paved the way for the two to have a 5-hour lunch.

“What a wonderful 5-hour LUNCH talking about anything, everything, and… everyone! After all it’s been 15 years since high school, we had a LOT of catching up to do. It’s true that some things change, and some things stay the same,” Concepcion mused on her post.

Reunited with our beloved guidance counselor from #InternationalSchoolManila! 🌎 A legend & icon who has touched so many lives, Mrs. Vicky Herrera 😍 . What a wonderful 5-hour LUNCH talking about anything, everything, and… everyone! 😅 After all it’s been 15 years since high school, we had a LOT of catching up to do. It’s true that some things change, and some things stay the same. Love you Vicky! Today was not enough- such a wonderful afternoon spent with you!!! 🌸🏡 #ISM #Alumni #InternationalSchoolManila

“Love you Vicky!” Concepcion added. “Today was not enough — such a wonderful afternoon spent with you!!!”

In a video clip that Concepcion also shared, she can be seen walking around the room, which was decked with more pictures and keepsakes from floor to ceiling. “This is Vicky’s wonderland,” Concepcion shared as she panned her camera around the room. “It’s all of us from IS and all the lives that she’s touched.”

At one point, Concepcion zooms in on a picture of her on the wall, taken during her modeling days for the clothing brand Human many years ago.

“Oh wow that’s me,” Concepcion said as she captured more pictures of her, some magazine covers, on Herrera’s wall. “Just when I thought Vicky forgot me.”

It’s clear Herrera, who is still the guidance counselor of the International School of Manila until this very day, has transformed and touched the lives of many students. And it shows: just as how the memory of Herrera eludes forgetfulness, the pictures and letters of the students on her wall also elude the possibility of ever being counted. NVG

LOOK: Anne Curtis nostalgic after meeting son of taho vendor from her childhood

KC Concepcion on her time off from show biz: ‘I’ve really been enjoying my privacy’