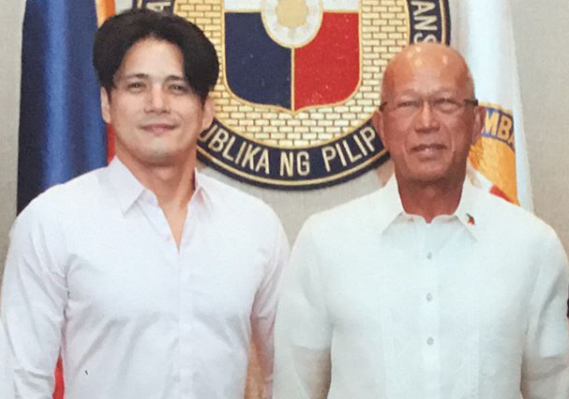 Action star Robin Padilla recently paid National Defense Secretary and retired Major General Delfin Lorenzana a visit at the Department of National Defense in Quezon City. Padilla shared their meeting on his Instagram account last July 1, where he spoke greatly of the secretary.

(A salute and thanks to the head of Department of National Defense under the officer and gentleman I admire, a man of his action more than his words, Secretary Delfin Lorenzana.)

Padilla, who usually portrays rough and brusque characters in his films, looked smart in his meeting with Sec. Lorenzana. In the series of photos he posted, Padilla can be seen proudly standing next to Sec. Lorenzana and other members of the executive department.

Padilla did not state the purpose of his visit to Lorenzana, but it’s known that Lorenzana has been a key figure in the political scene, particularly during the Marawi siege last year. Padilla, on his end, has used his influence to help the battle-scarred city of Marawi move forward into healing and rehabilitation, and at one point donated P5 million to the Department of Social Welfare and Development for the victims.

Padilla has also gathered fellow actor Piolo Pascual and film director Joyce Bernal, among others, last January to fly to Marawi with him. And on April, Padilla visited President Rodrigo Duterte in Malacañang Palace where they discussed rehabilitation efforts in Marawi.

It has been revealed, too, that one of Padilla’s latest projects is producing a Marawi-based film which would put to light true stories that happened during the siege. The film, “Children of the Lake”, is already at its pre-production stage.

(Until now they are still at pre-production stage because we are partnering with the Armed Forces of the Philippines on this one. They are helping us, for our film to be factual, because this is not a made-up story.) JB