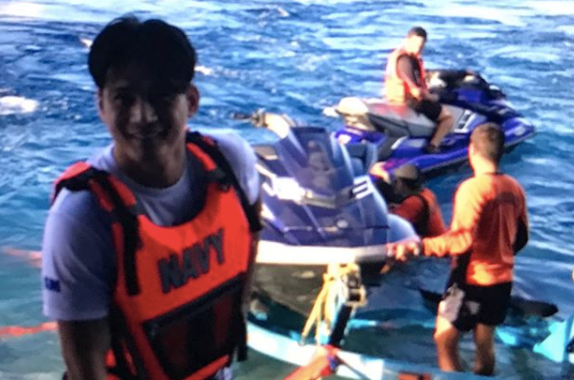 Action star Robin Padilla seems to be cozy around President Rodrigo Duterte, as he has been frequently seen in important functions with the latter these past couple of months.

Padilla visited President Duterte in Malacañang Palace last April to discuss rehabilitation efforts in Marawi, telling his fans that his only power is he is “friends” with the president. In the same month, Padilla was found dining with the President in Sofitel Philippine Plaza in Pasay City.

Last February, Padilla popped up in Special Assistant to the President Christopher “Bong” Go’s Senate hearing; Go is someone for whom Padilla has constantly and publicly expressed admiration, going as far as calling Go his “General Jacinto” of the modern day.

Yesterday, May 15, Padilla took to his Instagram page once more to share with his 780,000-strong followers pictures of him at the BRP Davao del Sur landing dock vessel of the Philippine Navy. In one picture, Padilla can be seen wearing a life vest and standing near the waters. In other photos, he showed a couple of jet skis on the dock, as well as him lying down on a bed, which may or may not be in the sleeping quarters of the ship.

Padilla also took some selfies with Presidential Spokesperson Harry Roque and Senator Win Gatchalian in the background, as they seemingly waited for President Duterte’s arrival.

President Duterte failed to reach the Philippine Rise yesterday, May 15. As per Roque in an INQUIRER.net report, the President did not go through with his trip because “it was too far and it was not feasible for the President to visit there.”

Meanwhile, in Padilla’s latest post on Instagram yesterday, he addressed some people’s concerns, specifically why “they” didn’t go to the West Philippine Sea.

(There are those who ask again why we did not go to South China Sea/West Philippine Sea. My fellowmen, I believe our president because he is saying the truth. What we should fight for at this time is what’s ours and for which we can spend our resources, without making enemies of huge nations.)

(What between the two would you spend your strength, effort, resources and life for? Will you choose trouble? Or will you choose what’s been smooth from the start?) JB