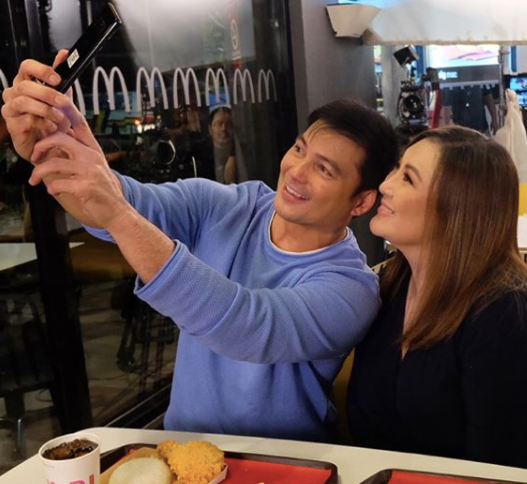 In a recent Instagram post by Robin, he reposted a photo of Sharon and Gabby together when they shot their hotly trending McDonald’s commercial.

(I never made it a secret that I was a solid supporter of Sharon and Gabby that’s why I pray that you two will make a movie real soon.)

Before 2017 ended Robin also reunited with Sharon via another smash hit movie entitled “Unexpectedly Yours.” He also made headlines when Sharon admitted that their relationship almost ended up in marriage.

The two reportedly fell in love on the set of their phenomenal 1991 hit “Maging Sino Ka Man.”

They hatched a plan to be husband and wife but Sharon had to back out because she learned that Robin had fathered a child.

Their reunion was well-accepted and highly supported by their fans from the time they started until now. But with the resurrection of the Sharon and Gabby love team, Robin showed no ill will and even showed support for the two.

In the early ’90s, Sharon did movies with Robin and Gabby that both marked strongly in her life.

She has always said that “Maging Sino Ka Man” with Robin has always been among her most important films both professionally and personally.

Meanwhile, Sharon earlier did a movie with Gabby entitled “Bakit Ikaw Pa Rin,” which in past interviews she described as her least favorite reportedly because of clashes with him.