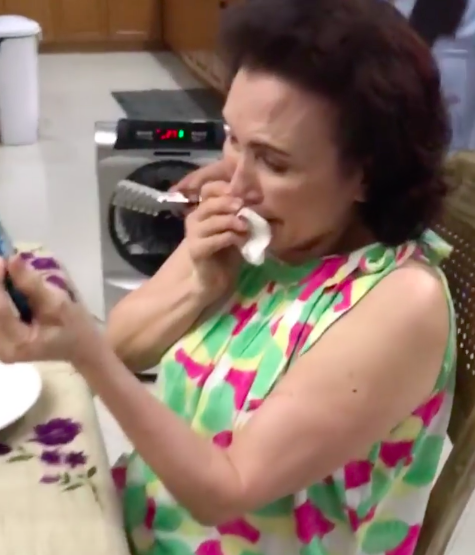 More than their fans, the most loved team-up in Philippine movies of Sharon Cuneta and Gabby Concepcion was most missed by their relatives,  who were also emotionally affected by their recent mini on-screen reunion.

Among them is veteran actress/singer and  Sharon’s aunt,  Helen Gamboa.

An emotional and crying Helen was captured on video as she watched the McDonald’s commercial of Sharon and Gabby on her mobile phone. Her daughter, actress/singer Ciara Sotto and her housemaids were also seen in the video and can also be heard laughing as the veteran actress gushed out her emotions. The video was posted by Sharon on her Instagram account.

Sharon was also kind enough to share a bit of her Aunt Helen’s participation in her love story with her ex-hubby. As  Helen continued to cry, Sharon jokingly burst her bubble and reminded the award-winning actress on how she, for a time, somehow played a villain to her and Gabby.

“MAMA MAY I REMIND YOU WHEN WE BROKE UP THE FIRST TIME WHEN I WAS 16 AND LIVED WITH YOU IN WHITE PLAINS FOR A WHILE HE CAME PALA SEVERAL TIMES AND YOU DIDN’T LET HIM IN AND YOU DIDN’T TELL ME! AND YOU KEPT ALL HIS LETTERS! I HAD NO IDEA! I FOUND OUT HIWALAY NA KAMI AT MAY ANAK NA! HAHAHAHAHAHAHAHAHAHA!” she wrote.

At the end of her statement, she pacified her aunt and told her that everything is now well between her and her perennial on-screen and once real-life love team. Sharon was also astounded at how deep their reunion had struck a nostalgic dagger into the hearts of her family.

“Awwwww Mama ko… itchokey… he is happy na and me ren, so please stop na crying. STOP WATCHING IT OVER AND OVER AND OVER! CIARA!!! DON’T GIVE HER NA THE PHONE! HAHAHAHAHA! Jusko pati lahat ng Gamboa kong Tita at clan ay nabulabog. First time in our history ito ano ba yan! Hahahahaha! (Posting this video with permission.)”

Just like all else, Gabby and their daughter, now singer/actress KC Concepcion were tagged in this post.

Sharon and Gabby excited the country with their inexplicable on-screen charisma back in the early ’80s. Their story which started with their hit teenage love movie “Dear Heart” in 1981 eventually led them to a lavish wedding ceremony in 1984 attended by no less than then President Ferdinand Marcos. However, their fairy tale love story didn’t last long. In 1987, the two separated and their marriage was annulled six years later. But even when they had separated, they still made movies together including “Bakit Ikaw Pa Rin”, “Tayong Dalawa” and “Una Kang Naging Akin” which was their 10th year anniversary movie offering to their fans.

After so many years, Sharon and Gabby say they have forgiven each other for all the pains of the past and nothing but good will and friendship abound in their hearts for one another.

Because of the trending TV commercial, fans are again hopeful and ecstatic to see the ’80s premiere love team back on the big screen.  /muf