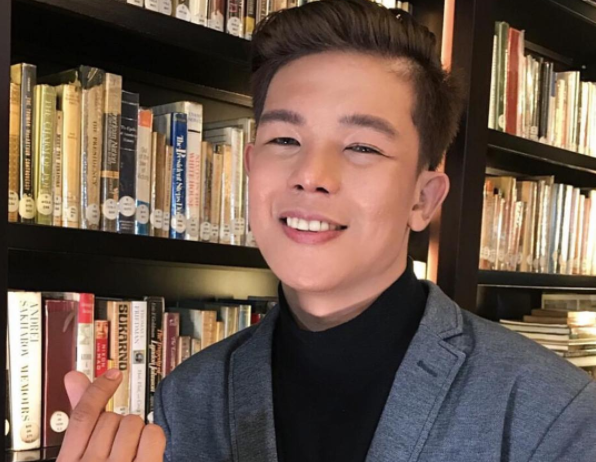 After Xander Ford, formerly Marlou Arizala, called himself a victim of Ogie Diaz’s disparaging remarks, the latter wrote an open letter on Facebook to clarify his statements.

On Oct. 6, the talent manager called out Ford’s behavior that has been observed by industry insiders. 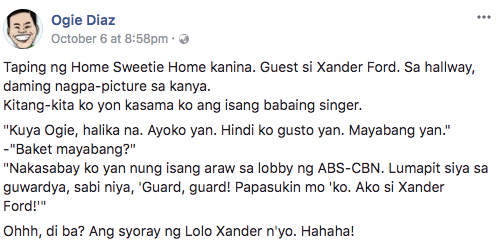 In the comments section, other insiders also shared their experiences with the performer’s attitude before and after his plastic surgery.

Actor Jeffrey Tam revealed that Arizala was removed from the TV show “Dolce Amore” because of an “attitude problem.”

Allan Nazareno, who works in the network, shared that Ford had allegedly yelled at a marshall of “Gandang Gabi Vice” and threatened not to attend the shoot if his manager was not allowed inside.

He was also supposedly seen covering his face with a jacket in a hallway when he saw a crowd in a studio.

In a now-deleted rambling Facebook post, Ford has stated that the allegations “weren’t true” and that the statements had hurt him to the point of tears.

“Nakakaiyak kasi kayo po yung matanda na dapat na nakakaunawa sa akin pero kayo pa po ang naghihila sa akin pababa…puro taping puro trabaho po ako, wala po ako tinanggihan kahit sino po sa inyo (It makes me cry because you’re the older ones who should be more understanding of me, but you are the one dragging me down. I’ve only been doing tapings and work; I haven’t turned down any of you),” he added.

He also stated that he was simply sharing others’ observations. “Kung sinasabi mong hindi totoo ang lahat ng akusasyon sa yo ng pagyayabang at pagmamaldita mo… depende naman yan kung sino sa ating dalawa o sa mga nakasaksi ang paniniwalaan ng mga tao (If you say that the accusations aren’t true about your arrogance or brattiness, it’s up to people to believe either of us or witnesses).”

Ford has yet to respond to Diaz’s statement, but has posted a selfie on Instagram this morning.

The caption reads, “Special Skill ko – Kaya kung (sic) maging masaya sa panglalait nyo kahit alam kung ang sakit-sakit na (My special skill is being happy at your insults even if they hurt so much).” JB