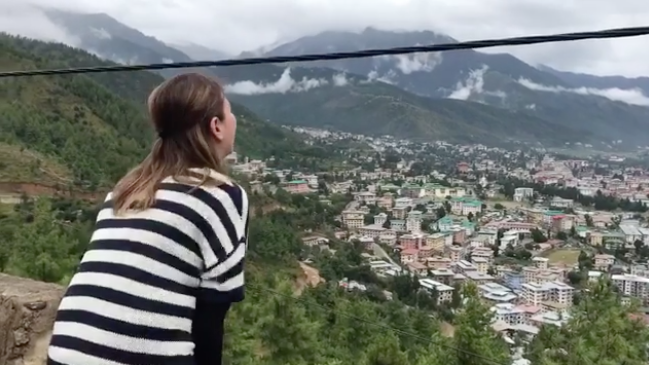 Remember that scene in the iconic indie movie “That Thing Called Tadhana”, the one that made moviegoers ache in pain when actress Angelica Panganiban yelled out her heart’s misery in the mountains of Sagada? She recreated the same scene in her recent vacation in Bhutan.

In the movie, Panganiban’s character, Mace, had her heart broken by her longtime boyfriend and still hopes for a second chance. She then meets Anthony, played by actor JM de Guzman, who will accompany her in a journey towards moving on. Her misery took them from Manila to Baguio, and then to Sagada and back to Manila.

While it was obvious that she was just re-enacting the iconic scene, some netizens could not help but speculate: they think her shouting of her famous lines might be her way of letting her emotions out over ex-boyfriend, actor John Lloyd Cruz, who is now rumored to be in a relationship with sexy actress Ellen Adarna.

Meanwhile, some commenters simply requested for a sequel of the hit romantic movie.

It was not too long ago when speculations that she was reconciling with Cruz hit the headlines. The two were occasionally seen out in public even after their break-up. However, just a few months later, Cruz shocked fans when photos and videos of him with Adarna started appearing in social media.

At any rate, Panganiban’s fans and followers seem to really care about her. As commented by one on the re-enactment post, worried for the actress yelling again at the edge of the mountain, “Cut na angge.. mahulog ka [laughter emojis]” (Cut, Angge! You might fall!) JB