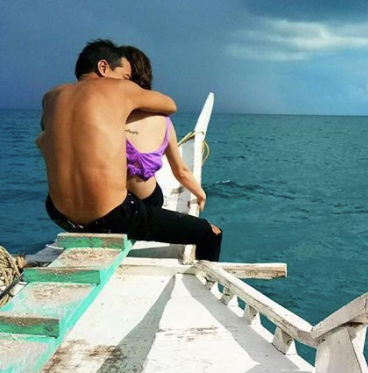 Kapamilya actors John Lloyd Cruz and Ellen Adarna have been recently piquing the interest of the public about whether they are a couple or not. After a series of viral photos and videos that showed them intriguingly sweet to each other, fans are desperate to know about their actual relationship status.

While their posts lately have been puzzling enough, what might just confirm their romance is Adarna’s recent Instagram post, where Cruz was seen sweetly hugging her, as they sail onto the sea in her hometown of Cebu.

Fans were quick to throw in their congratulatory messages for the two.

But while some sent well-wishes, others threw in negativity, with a few commenters even saying that the two actors might be using drugs.

A few anticipated a doomed end.

Not long ago, speculations that Cruz was reuniting with former longtime girlfriend, actress Angelica Panganiban, made the rounds in social media. Even after their relationship, the two were still occasionally seen together in public.

Adarna, on the other hand, had a similar fate with her ex-boyfriend, presidential son Sebastian “Baste” Duterte. Their relationship gained widespread controversy when Baste admitted that he overlapped her relationship with Adarna with that of his longtime non-showbiz girlfriend Kate Necesario. Baste and Necesario have a son. After their break-up, videos and photos of Baste and Adarna still being together also surfaced on social media. JB