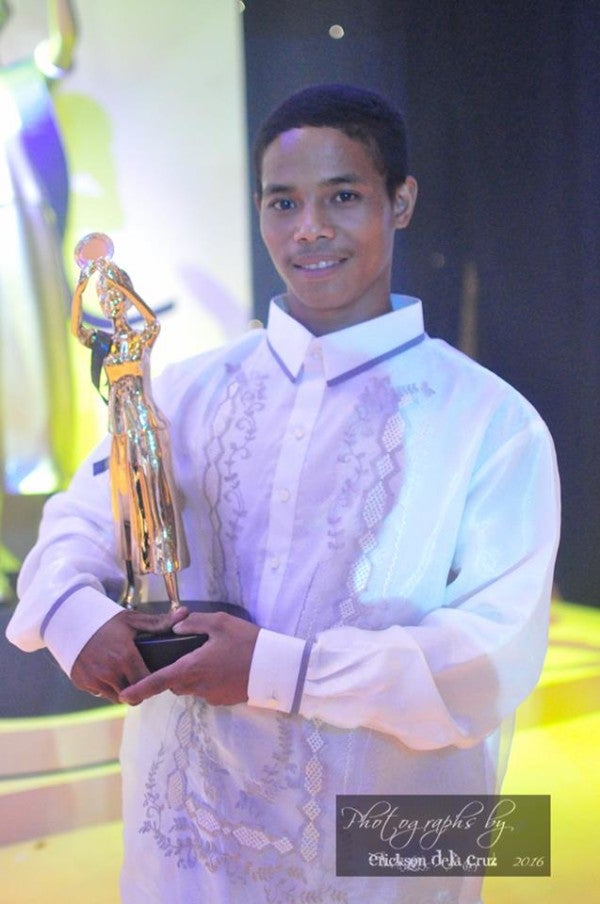 Aeta Gabby Cabalic was busy cleaning newly harvested taro (gabi) in their farm in Zambales province when he learned that he would be receiving a best actor trophy from the 1st ToFarm Film Festival, which held an awards ceremony on Wednesday.

Gabby had no intention of attending the glamorous event at the posh Makati Shangri-la Hotel, but ToFarm filmfest producer Milagros How said she personally fetched the boy because she “wanted everybody involved in the festival to be present.”

“It’s not usual to see a helicopter landing near our house. I wasn’t prepared when I came up to meet her. I was dirty and wasn’t even wearing slippers,” Gabby told the Inquirer shortly after the awards show, which he attended donning black slacks, leather loafers and barong Tagalog that seemed a size bigger than him.

Asked what he thought was the reason “Paglipay” earned the judges’ nod, Dulay said: “The material is unique, but was able to relate to the festival’s goal in promoting traditional farming. The film tackled ‘kaingin,’ which most of us thought was harmful,” he explained. “From making the film, I learned that this farming process is not really destructive when done right. I was able to show the aetas’ connection to nature through the film–that they will not destroy their main source of livelihood.”

Dulay said he was thankful that the jury took notice of his film. “I made sure that the film was culturally and politically correct. I had the chieftain and the elders as consultants,” he shared with the Inquirer.

“Also, I struggled on whether I should cast real aetas because I had very limited time to shoot. We had to make them attend an acting workshop. Now, I’m glad that I did.” The workshop was facilitated by theater-television-film actor Rollie Inocencio.

Veteran actor Bembol Roco’s performance in “Pauwi Na” did not go unnoticed. He shared the best actor honor with Gaby.

“I was hoping for it, but wasn’t expecting it,” said Roco, adding that he was rooting for Arnold Reyes of “Pitong Kabang Palay” because he thought the latter was “effective in what he did.” Roco said the most difficult part in portraying Mang Pepe in the film was the “very emotional” scene at the film’s end.

Cherry Pie Picache, who played Bembol’s wife in the Paolo Villaluna and Ellen Ramos drama also won the best actress award. Picache said her award was “not just for me but also for the whole cast. We did so much together that if felt like we were really family.” She added that the all-important ending filled her with “grief, desperation, confusion and unbelief.”

Villaluna and Ramos brought home the Jury Special award for Outstanding Film and best story for their work on a masterpiece based on a feature article published in the Inquirer ten years ago on a family who travelled from Manila to Samar on a pedicab. The duo also won the best editing award, while Mao Fadul brought bagged the best production design trophy.

The best sound award was given to Arnel de Vera and best music honor, to Lorenzo Nielsen. First-time director Cariaga, who wrote about her life growing up in Isabela, won best screenplay.

Vic Acedillo Jr. “Kakampi,” which tells of a man’s return home to tend to the family’s lanzones farm in Camiguin, was given the ToFarm Festival Professional Responsibility Award.

The 1st ToFarm Film Festival is on its extended run at the SM Megamall until July 26. Provincial screenings in cities such as Cabanatuan and Angeles will be from August 24 to 30; Cebu, September 14 to 20; and Davao, October 12 to 18. The six finalists will also be shown at the UP Film Center in October and in all Cinematheques in November. TVJ