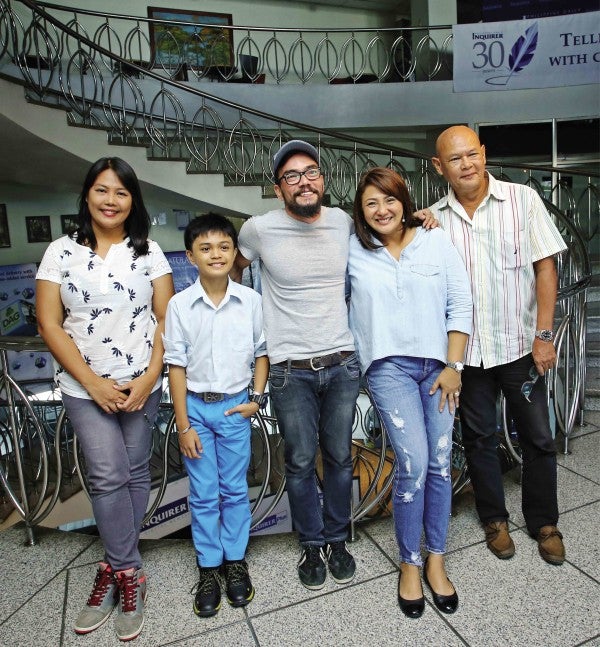 An ailing Mang Pepe and his family leave their home in Manila to go back to their “perceived paradise: the province.” Not having enough money, they decide to use pedicabs for transport.

That, in a nutshell, is the story of director Paolo Villaluna’s “Pauwi Na”—one of the six finalists of the 1st ToFarm Film Festival, which runs until July 19 in selected SM cinemas in Metro Manila.

“The story is inspired by an article published in the Inquirer,” said Bembol Roco, the movie’s lead actor. “The poor family from Manila took four months to get to their destination in Leyte. In Bicol, a reporter found them, wrote about their journey and hooked them up with the local government. I’ve always wanted to meet the family, but Direk [Paolo] said we had lost contact with them.”

Direk Paolo said he had the script as early as 2006 and that Viva Films and Star Cinema were interested in producing it then.

He recalled: “In 2006, there was a family in front of our house on N. Domingo St. in Sta. Mesa who was in the process of relocating. They were in a pedicab. Some parts of their experiences were included in this story.

“On the same week I met them, I read the Inquirer article about a whole family going to Leyte using pedicab.

“One of our characters is a blind, pregnant woman whose best friend is Jesus Christ, who’s 30-something in the film. They (Viva Films and Star Cinema) wanted to change Jesus Christ to Santo Niño. I tried to rewrite the script for them, but it was difficult. What I got was a dream cast, instead. I guess the reason it took years to make the film was because Bembol and Cherry Pie Picache were destined to be in it.”

Aside from “Pitong Kabang Palay” and “Pauwi Na,” the other ToFarm film fest finalists are: “Free Range” by Dennis Marasigan, “Kakampi” by Victor Acedillo Jr., “Paglipay” by Zig Dulay and “Pilapil” by Jose Johnny Nadela. Each of them received a cash grant of P1.5 million from ToFarm film fest producer Milagros How, who’s also the EVP of Universal Harvester Inc. 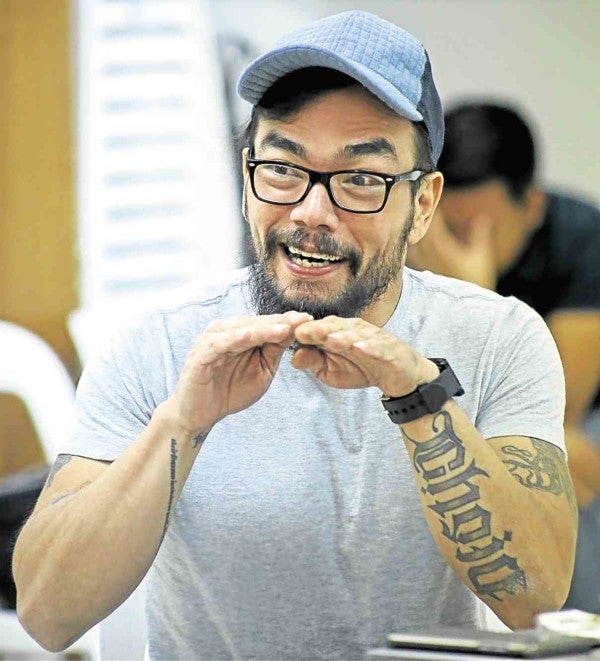 Excepts from the hourlong chat:

Bembol, what do you remember most about acting in Lino Brocka and Ishmael Bernal’s films, and the differences in filmmaking styles, then and now?

Bembol (B): First, we no longer use 35mm. Lino and Ishmael were actors’ directors. More than themselves, their concern was for their actors to shine in their films. They helped us in characterization. That’s what Direk Paolo did for all of us in “Pauwi Na.”

What convinced you to do this film?

B: It was the uniqueness of the story and how it was written. I knew right away that it was going to be a difficult shoot.

Paolo (P): We were on the road most of the time. We would drive around, stop and get off (our vehicles) to shoot. We had a lot of guerrilla moments.

B: We would start filming at 4 a.m. That was hard, but I’m glad we did it. We might not have gotten the shots we wanted if we didn’t start work then.

I have only good words for Direk Paolo. He has so much passion in him. His energy is contagious. He’s also always in control of the situation. I told him that he reminded me of Lino in many ways.

Cherry Pie (CP): There were problems along the way, but he always had a positive outlook.

You first worked together in “Isda.” How different is your take in this film compared to that one?

B: We have more scenes that are funny, endearing and touching in this film.

Would you return to the province faced with a similar situation?

B: It’s the most logical thing to do. What else will I do in the city after all the hardships? I’d rather go back to where I came from. Life is hard in the city, and that’s the truth.

CP: If there’s a chance for me to tell the people living in rural areas to stay there, I would. It’s already very crowded in Manila. I’m hoping that the government will do something about developing the rural countryside.

Maricel, aren’t you a farmer yourself?

Maricel (M1): Yes, in Isabela. We’re planting rice crops right now. My husband maintains our farm. I chose to stay in our province even when I really wanted to make films. I recently resigned from work there to study filmmaking in the city. It took me a lot of courage to leave everything there and come here to study. “Pitong Kabang Palay” is my directorial debut.

What makes your film different from the other entires?

M1: It’s the only film in the festival that’s solely about farming. “Pitong Kaban” is my life story. My father receives a small percentage of the profit that the landowner gets from the farm. The family also receives seven sacks of rice, which have to last for four months—or until the next harvest.

Micko, tell us about your role. Do you have a dream project?

Micko (M2): I play Lito in “Pitong Kabang Palay,” the eldest of three siblings—he’s smart and responsible. In his own little way, he helps his parents solve their problems.

I hope to play someone who’s mentally challenged. I also want to be part of horror and fantasy movies. I’m in Grade 6 now. My plan is to study and work at the same time. 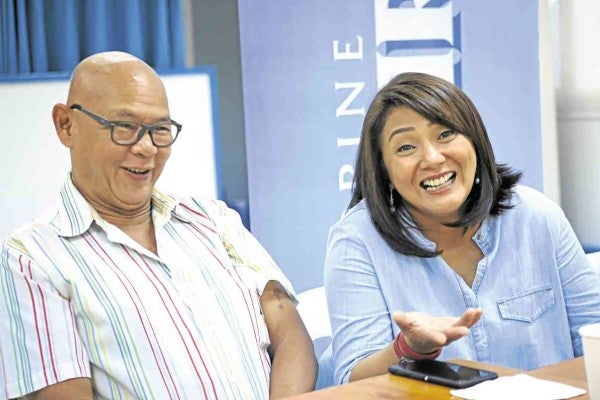 Cherry Pie, is it a conscious effort for you to do indies even though you’re in demand in teleseryes?

CP: I didn’t work for a year after my mom died. After “Isda,” I didn’t find anything interesting until I got the script from Paolo. I said this was what I’ve been waiting for. I said that if I’d do another indie, I want it to be memorable, significant and relevant.

Paolo, why did it take you forever to get back to indie filmmaking?

P: It has been seven years since my last one (“Walang Hanggang Paalam”). I saved up money by working in advertising. I used them all up in this film (laughs).

My first three films (with Ellen Ramos) were very personal. For our fourth, we wanted to dabble in social realism.

Maricel, what was the biggest challenge you had to hurdle while filming “Pitong Kabang Palay”?

M1: The heat was scorching when we were shooting it. A member of our production staff suffered a mild stroke while we were in Isabela.

My lead actor here, Alfonso Iñigo Belen, is only 7 years old. This is his first full-length film. I saw him at a casting call. He memorized a three-page script in just five minutes. We made him attend an acting workshop and participate in immersion sessions. I brought him and the other young cast members of the film to the rice field, made them eat frogs, crickets and other “exotic” dishes that the locals normally eat.

Paolo, you always work with Ellen. What happens when you disagree about an idea?

P: Our deal is, after we agree on the script, I handle the direction and she’s responsible for logistics. We’re like the Coen brothers (Joel and Ethan): one is the writer-producer and the other, the director. It’s difficult if you don’t consider your producer your partner. You’ll always look behind your back and worry about the small stuff. In films, I have Ellen. For TV, I have Patricia (Evangelista, cocreator and writer of the current affairs show, “Storyline”). For life, well [that’s another story] (laughs).

Read Next
Love Knots, July 15, 2016
EDITORS' PICK
Geek out at TOYCON 2022 powered by Smart Signature
UK’s Boris Johnson will resign, BBC reports
High-risk pregnancy: Reducing your risk is in your hands
House energy committee chair Arroyo bats for cheap electricity
High inflation: Your P1 is now worth only 87 centavos
Unemployment rate up to 6% in May
MOST READ
Suspect in grisly killing of missing woman in Bulacan arrested
Hong Kong suspends flight bans as it eases COVID-19 rules
Kim Atienza’s daughter flaunts bikini body in response to critics of her ‘revealing photos’
Cop slain in Isabela ambush
Don't miss out on the latest news and information.