Daniel Craig: is the blond Bond getting bored? | Inquirer Entertainment

Daniel Craig: is the blond Bond getting bored? 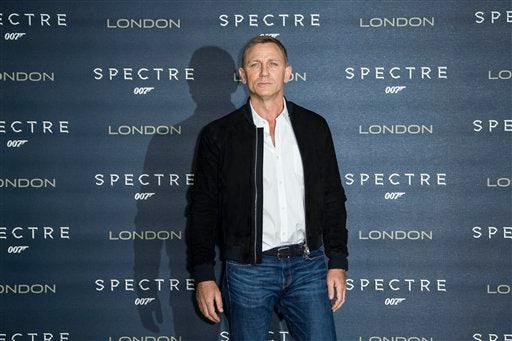 Daniel Craig poses for photographers during the photo call for the latest Bond film, Spectre, at an hotel in central London, Thursday, Oct. 22, 2015. (Photo by Joel Ryan/Invision/AP)

LONDON—Daniel Craig makes his fourth appearance as James Bond in “Spectre”, which premieres Monday, but his time as 007 may be nearing an end if his recent jaded comments are anything to go by.

The 47-year-old British actor has said he would “rather slash my wrists” than play the suave spy again, telling Time Out magazine: “All I want to do is move on.”

While he has also suggested that he will continue, Craig’s comments show at least an ambivalence about the all-consuming role of Bond from an actor who guards his privacy closely and enjoys a quiet pint in the pub.

When he was first named as Bond in 2005, taking over from Pierce Brosnan, many questioned whether the blond-haired, blue-eyed, gym-sculpted Craig was the right man for the job.

Even Sam Mendes, the director of “Spectre”, was initially skeptical.

“I thought Bond had become the opposite of what Daniel is — a slightly disengaged, urbane, jokey, eyebrow-raising, you know, a pastiche in a way,” he told the BBC.

But the intensity Craig has brought to the part has allowed the multi-million dollar franchise to be rebooted with a harder, more serious edge and won round many of the sceptics.

Roger Moore, one of his predecessors, has called Craig the best Bond ever and told Time magazine that his performances had “guaranteed Bond another 50 years of life”.

Fans have also got used to seeing the star, who is contracted to do one more film, play one of the most iconic parts in cinema.

“That great big handsome-Shrek face with its sweetly bat ears has grown into the role,” the Guardian newspaper’s five-star review of “Spectre” said.

Despite being one of the most famous film stars in the world, Craig likes to keep his private life private.

He is married to actress Rachel Weisz, star of “The Constant Gardener” and “Oz The Great and Powerful,” and has a daughter from a previous marriage to another actress, Fiona Loudon.

Born in 1968 in Chester, northwest England, to a pub landlord father and art teacher mother, he started acting at an early age.

He attended drama school in London and had a string of roles in television, art house cinema and on stage before breaking through in Hollywood with films like 2001’s “Lara Croft: Tomb Raider” and 2002’s “Road To Perdition”, directed by Mendes.

Craig has always insisted his own personality is a long way from the tuxedo-wearing, Martini-drinking Bond. The actor prefers jeans, a T-shirt and a cold beer in real life.

Between Bond films, he often chooses more highbrow roles, including starring in an acclaimed 2013 Broadway production of Harold Pinter’s “Betrayal” with Weisz.

He added: “The day I can walk into a pub and someone goes, ‘Oh, there’s Daniel Craig’ and then just leaves me alone, that’ll be great.”

‘James Bond would be an alcoholic’