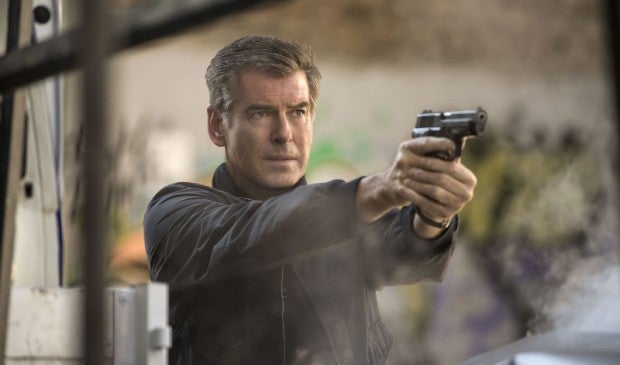 This image released by Relativity Media shows Pierce Brosnan in a scene from “The November Man.” AP

“Sure. Why not?” the Irish star was quoted as telling men’s magazine Details when asked if he could picture a gay Bond.

Brosnan said he doubted Bond producer Barbara Broccoli would allow a gay Bond to happen in her lifetime.

“But it would certainly make for interesting viewing,” he added.

“Let’s start with a great black actor being James Bond. Idris Elba certainly has the physicality, the charisma, the presence.”

Elba, 42, is seen as a frontrunner to succeed Daniel Craig, who has played the suave British agent for the last 10 years.

Brosnan played Bond in movies Goldeneye, Tomorrow Never Dies, The World is Not Enough and Die Another Day in the 1990s.

His remarks were published five months after another previous 007 actor, Roger Moore, was blasted on social media for suggesting race should be a factor when casting the next Bond.

French magazine Paris Match quoted him as saying: “Though James has been played by a Scot, a Welshman, an Irishman, I think he should be English-English. It’s nonetheless an interesting idea, but unrealistic.

“An interview I gave to Paris Match implies I said something racist about Idris Elba. That is simply untrue,” Moore wrote on Twitter.

“When a journalist asks if ‘Bond should be English’ and you agree, then quotes you saying it about Idris Elba, it’s out of context,” he added.

London-born Elba is the son of a Sierra Leonean father and a Ghanaian mother.

His most famous role to date is playing former South African president Nelson Mandela in “Mandela: Long Walk to Freedom.”

Ian Fleming’s original Bond novels say the secret agent was the son of a Scottish father and a Swiss mother and spent much of his early life outside Britain.

Orphaned at 11, the fictional hero then lives with an aunt in southeast England and is educated in Edinburgh.