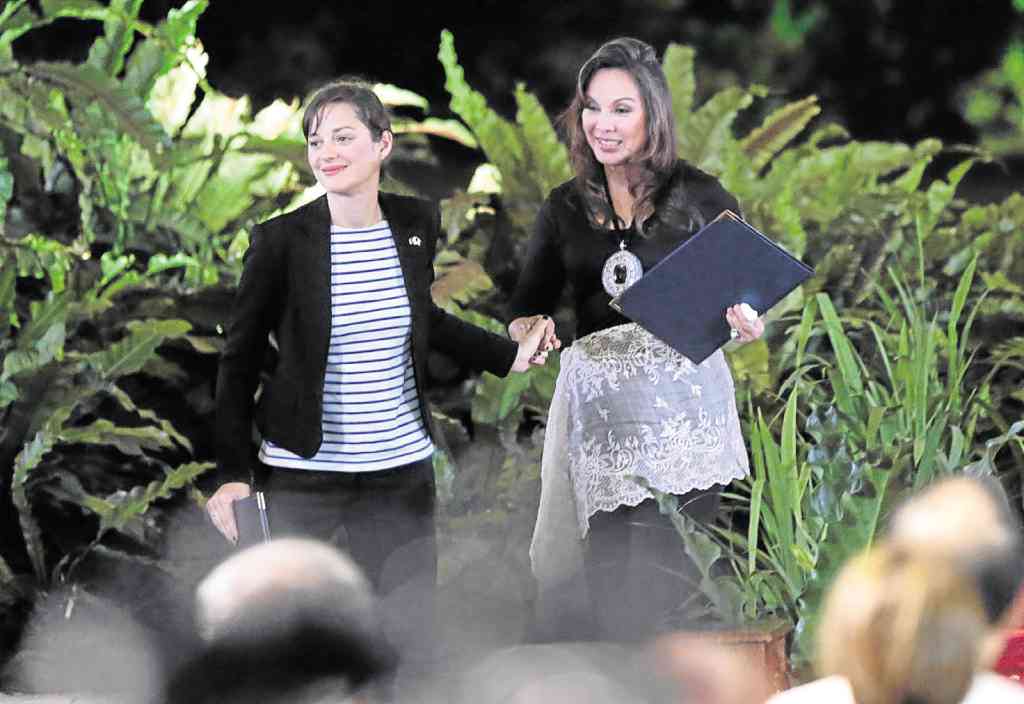 MORE THAN A PRETTY FACE Oscar-awardee French actress and environmentalist Marion Cotillard (left) joins Sen. Loren Legarda, herself an advocate of green development, at the launching of the “Manila Call to Action on Climate Change” in Malacañang on Thursday. GRIG C. MONTEGRANDE

French actresses Marion Cotillard and Melanie Laurent added star power to the delegation of French President François Hollande, who is on a two-day state visit to the Philippines to drum up support for actions against climate change.

Hollande and his entourage arrived on the French presidential plane, also known as Cotam One, past 11:15 a.m. at Villamor Air Base in Pasay City.

Shortly before noon, the French president descended from the Cotam One (Cotam Unite), an Airbus 330, the plane designated for the president of France.

On his way down, he slightly tripped, but he managed to gain his composure in a heart beat. 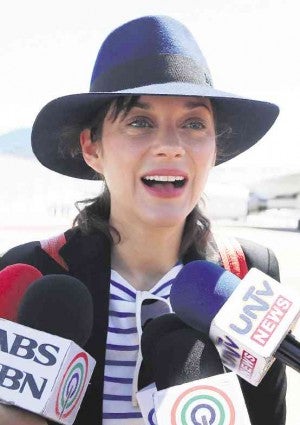 ENCHANTÉ French actress and environment activist Marion Cotillard gets a lot of attention at Villamor Air Base when she flew in as part of the party of French President François Hollande. NIÑO JESUS ORBETA

After greeting the officials with handshakes, Hollande walked on the red carpet as he headed to Kalayaan Hall of the air base before he and his entourage proceeded to a wreath-laying ceremony at the Rizal Monument in Rizal Park at 11:45 a.m.

Cotillard was seen behind the entourage walking with crutches before boarding a bus ferrying the French delegation.

“We want to share our thoughts on the issues of climate change. It’s not just the climate change but the survival of the millions of people on this planet. [The] Philippines of course, is one of the first countries which are aware that something should be done,” Cotillard, a spokesperson for Greenpeace, told reporters in an ambush interview.

Asked why she was walking with crutches, Cotillard replied: “Oh nothing serious… I am doing good.”

A singer and songwriter, Cotillard, 39, is known for her roles in “Inception” and “La Vie en Rose” for which she received an Oscar for best actress for her role as French singer Édith Piaf.

She also appeared in such films as “A Very Long Engagement,” “Nine,” “Rust and Bone,” “The Immigrant,” and “Two Days, One Night.”

Like Cotillard, Laurent, who won a César Award for most promising actress in “I’m Fine, Don’t Worry,” is an environmentalist.

Laurent, 32, visited a Climate Defenders Camp in the peat lands of the Indonesian rainforest.

On the invitation of the Blue Marine Foundation, she joined the campaign against overfishing.

Hollande’s visit is “low key” compared with the recent state visits of world leaders like US President Barack Obama and Pope Francis.

“The delegation did not even request priority assistance for their landing and takeoff in Manila,” said Rodante Joya, deputy director general for operations of the Civil Aviation Authority of the Philippines.

During the visits of Obama, Francis and other heads of state in the past, a no-fly zone before and after the landing and takeoff of their aircraft had been implemented to ensure the safety and security of the officials and their parties.

“But we will be extending the assistance appropriate to his stature as head of state,” Joya said.