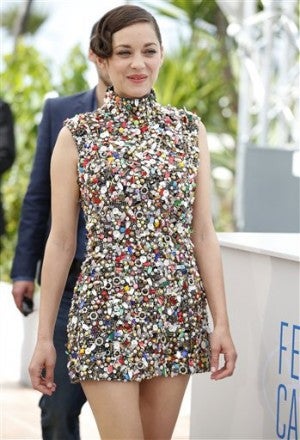 The gamble paid off beautifully.

Cotillard was the star of the “Two Days, One Night” screening Tuesday by Belgian director-brothers Jean-Pierre Dardenne and Luc Dardenne.

Cotillard’s colorful minidress in silk organdy and pongee, which sported a turtleneck, was make of myriad bric-a-brac including screws, beads, buttons and bits of beer cans from Paris and Brussels.

It came from the Maison Martin Margiela spring-summer 2014 collection and took a reported 67 hours to make.

The marvelous look was the most inventive seen at the festival so far.