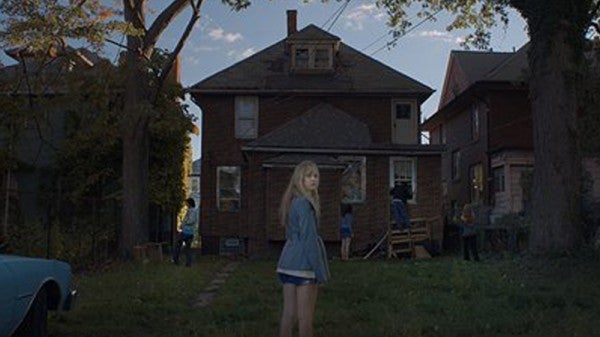 In this image released by Brigade Marketing, actress Maika Monroe appears in a scene of It Follows, directed by David Robert Mitchell. “It Follows,” has been arguably the buzziest American film at Cannes next to Bennett Miller’s wrestling drama “Foxcatcher,” which boasts a far more famous cast and a major premiere at the Palais des Festival. AP

CANNES, France—It can be hard to stand out amid the hundreds of screenings at Cannes’ sprawling festival. But this year, a little American indie has captured international attention with well-crafted horror.

“It Follows,” directed by David Robert Mitchell, has been arguably the buzziest American film at Cannes next to Bennett Miller’s wrestling drama “Foxcatcher,” which boasts a far more famous cast and a major premiere at the Palais des Festival. It’s the second film by Mitchell, whose micro-budget “The Myth of the American Sleepover” was acclaimed for its tender teen drama.

The concept of “It Follows” is simple: a kind of curse is passed like a sexually transmitted disease, and whoever has it is trailed by an unknown evil. While the conceit (not an unfamiliar one to the genre) runs thin at times, the thickly atmospheric filmmaking — heavily influenced by the ’80s horror of John Carpenter — rarely does, despite a shoestring budget. Newcomer Maika Monroe excels as the infected protagonist, but Mitchell is clearly an up-and-coming talent capable of energizing tired genres.

The film screened in Critics’ Week section, a Cannes sidebar featuring films only from first- and second-time filmmakers. While horror is rarely represented at festivals like Cannes, the inclusion of “It Follows” — and the response it has provoked — proves it will be one for horror fans and art-house moviegoers alike to look for when it hits theaters. “It Follows” is shopping for distribution at Cannes.