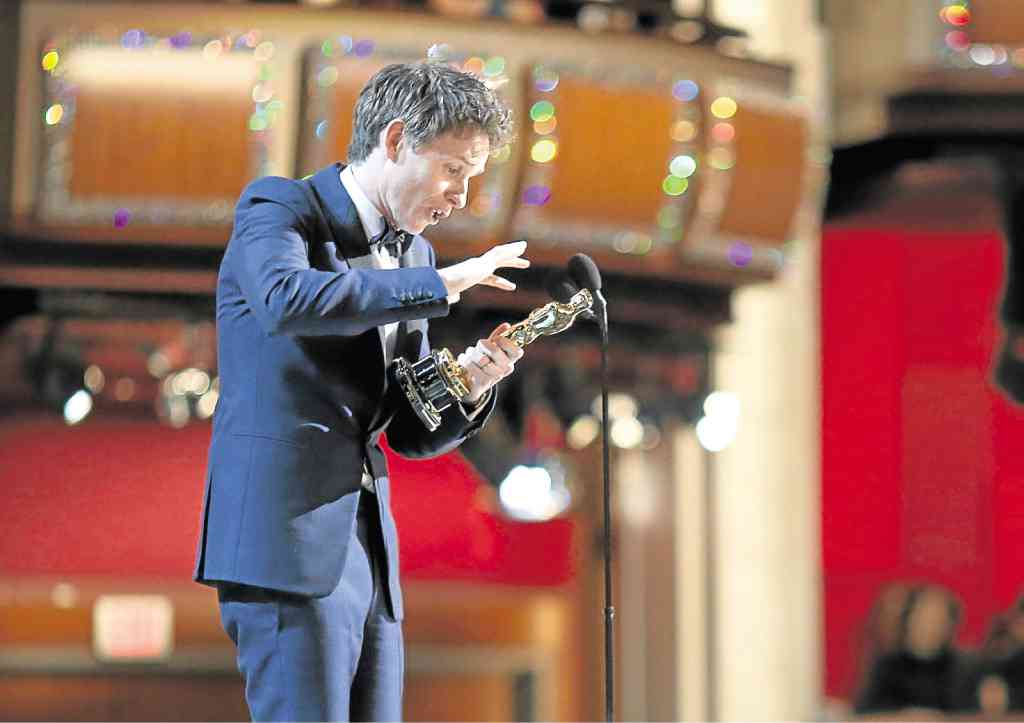 EDDIE Redmayne was more nervous when he had to sing with the “Les Mis” cast on the Oscars stage in 2013.
Getty Images/AFP

LOS ANGELES—While Eddie Redmayne gave the most endearing acceptance speech, breaking into disarming giggles after saying the word “Oscar” out loud at last Sunday’s big night, best adapted screenplay winner Graham Moore gave the most moving remarks. The writer of “The Imitation Game” disclosed that at 16, he felt different, suffered from depression and tried to kill himself.

Graham, who adapted the biography, “Alan Turing: The Enigma” by Andrew Hodges, earned a standing ovation from the star-studded 87th Academy Awards audience at the Dolby Theatre in Hollywood. The Columbia University alum cited Turing, who helped crack tough Nazi codes and shorten WWII but was later prosecuted for homosexuality under UK’s anti-gay laws in the 1950s. 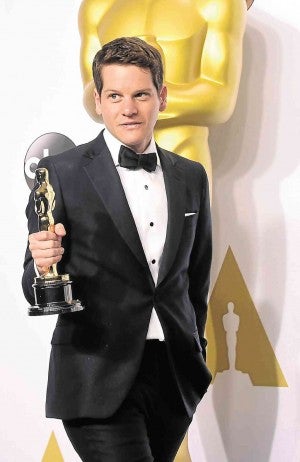 GRAHAM Moore has been obsessed with Alan Turing’s story since he was a teenager. “Alan always seemed like the outsider’s outsider, this guy who never fit in, for so many reasons, in his own time.” AFP

Turing killed himself at the age of 41.

“Alan Turing never got to stand on a stage like this and look out at all of these disconcertingly attractive faces and I do,” said Graham, a Chicago native whose mother, Susan Sher, served as the city of Chicago’s chief lawyer and First Lady Michelle Obama’s chief of staff. “That’s the most unfair thing I’ve ever heard. So, in this brief time here, I want to say this: When I was 16 years old, I tried to kill myself because I felt weird, I felt different and I felt like I did not belong.”

“And now, I’m standing here,” continued the 33-year-old who looked up to Turing as his hero since he was 14. “So, I would like for this moment to be for that kid out there who feels like she’s weird or she’s different or she doesn’t fit in anywhere. Yes, you do. I promise, you do. Stay weird. Stay different. And then when it’s your turn and you are standing on this stage, please pass the same message to the next person who comes along.”

Backstage, Graham, whose bestselling debut novel, “The Sherlockian” debuted in 2010, fielded questions from journalists suddenly very curious about him.

On his decision to reveal something so personal to a global audience, Graham explained, “The cameras are just little black circles so it’s not like I see a billion people when I’m out there looking around. No, it was really hard but it felt…I’m a writer, when am I ever going to be on television? This was my 45 seconds in my life to get on television and say something so I felt like I might as well use it to say something meaningful.”

Asked how he turned his life around from a suicidal and depressed teenager into an Oscar-winning screenwriter, Graham answered, “Twenty years later. It’s been a little while. Depression is something that I have dealt with every single day of my life since. But I’m very blessed to have a family that was so supportive then and has been so supportive ever since.

“My mother, who is just over there somewhere, was sitting next to me tonight. I know for her who has seen me in all the stages of this, it was really meaningful. I feel very blessed to have had friends and family around who are so supportive and not everyone gets to have that. I’m very aware of how lucky I am to have been so blessed.”

The screenwriter and author, who played in rock bands, created a music studio and worked as a sound engineer in New York while he established his writing career, said that Turing’s story inspired him. “I’ve been obsessed with Alan’s story since I was a teenager,” he shared. “I feel very lucky to have known it when I was very young and to have known about him. He was always a tremendous hero of mine. 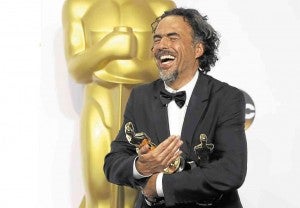 “Alan always seemed like the outsider’s outsider, this guy who never fit in in his own time for so many reasons. Because he was the smartest man in every room he entered, because he was a gay man at a time when that was not simply frowned upon, but was literally illegal, and then because he was keeping all these secrets for the government.

“And so he was the guy who was sort of apart from society for so many different reasons, but precisely because he was apart from society, he was able to see the world in a way that no one else had, and I always found that incredibly inspirational.”

Asked if he felt added pressure adapting the story of Turing since there are few films that accurately represent the LGBT community, Graham replied, “Yeah, I certainly did. When you’re approaching a story of this magnitude and you’re approaching a life and a person as unique as Alan Turing, there’s this tremendous responsibility on your shoulders… to tell his story fairly, accurately and responsibly.

“Alan is someone who was so mistreated by history. He is someone who, as a gay man, was persecuted by the government on whose existence he provided for. And, as such, I always felt like he needed a film that spread his legacy, that celebrated it and brought it to a new audience of people who might not otherwise have been exposed to this man because history had treated him so poorly.”

As to what he’s doing next, Graham announced, “I’m finishing my second novel. I’m almost done.”

Later, Graham clarified some folks’ presumption that he was gay. “I’m not gay but I don’t think you have to be gay to have a gay hero (Turing),” he was quoted as saying.

Alejandro González Iñarritu was asked about presenter Sean Penn’s quip, “Who gave this son of a b**** a green card?” after the actor announced the Mexican filmmaker’s “Birdman” as the best picture winner. The director stressed, “I found it hilarious. Sean and I have that kind of brutal relationship where only true friendship can survive.

“When I was directing him in ‘21 Grams,’ he was always making jokes. And I also tell him a lot of very tough jokes that I will not tell you. But anyway, we have that old friendship. I didn’t find him offensive. I think it was very funny, in my personal view.”

On being able to tell stories that are not necessarily about Latinos, Alejandro, who also won the best director prize, declared, “Look at this room. I don’t know how many nationalities are in this room but I don’t feel different from anybody here. You can be from any continent, any language. I don’t care. I feel very related to any of you.

“So I, as an artist, as a human, as a filmmaker, cannot have these stupid borders, flags and passports. Those are concepts invented by human society. But, honestly, naked, in tighty-whities, we will be the same. I have never felt that different.

“So for me to make films in the United States, Africa, Spain or Mexico…I’m talking about human beings and emotions. That’s the beauty of art. Art doesn’t have those stiff ideological borders that f*** the world so much.” 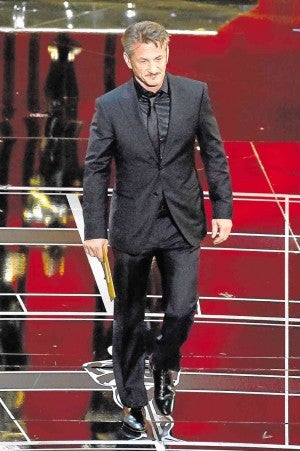 SEAN Penn was also on the receiving end of “tough jokes” from Iñarritu when they filmed “21 Grams.” Getty Images/AFP

Eddie, who cradled his best actor trophy for “The Theory of Everything” like a baby at one point in our backstage time with him, said he was not as nervous as the first time he appeared on the Oscars stage in 2013.

“I was weirdly not that nervous because two years ago, I came to the Oscars for the first time with ‘Les Miserables,’” said the amiable British actor. “I had to sing live on stage. Just before going on, someone with a headset said, ‘Yeah, that’s a billion people watching.’ That’s too much stress for your vocal chords to possibly consider. So that was such a terrifying prospect but actually, today felt much more relaxing. You either win or you lose—either way, I was so thrilled to be invited to the party.”

J.K. Simmons, a first time Oscar winner at 60 for his tour de force performance in “Whiplash,” looked back at his struggling days when he considered giving up on acting several times.

“I almost got back on the bus a handful of times,” J.K. admitted. “If I had any really reasonable options in terms of employment, I probably would have, but unfortunately, I didn’t—or fortunately, I guess, at the same time. I read a very romantic book when I was young, when I was in college—(Rainer Maria) Rilke’s ‘Letters to a Young Poet.’

“I’ve always felt that if you are in any kind of an artistic, creative endeavor and you feel that there’s something else you could do for a living and be happy, you should do something else. Because you are much more likely to find comfort and happiness. If you can look deeply within yourself and honestly answer that there is nothing else that will bring you satisfaction, then there’s your answer.”