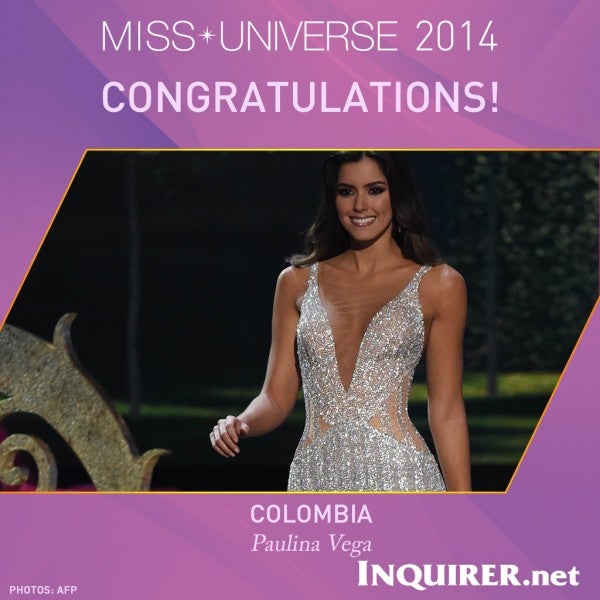 Wearing a silver gown, Vega bested 87 other candidates to win the crown.

Other candidates with Vega in the top 5 were:

The final round of the competition was divided into two parts: first, the top five candidates from USA, Netherlands, Colombia, Jamaica, and Ukraine answered questions given by the judges.

One of the questions to the candidates was asked by Filipino boxing champion Manny Pacquiao. His question to Miss USA Nia Sanchez was “If you were given 30 seconds to deliver a message to a global terrorist, what would you say?”.

On the second part of the “question-and-answer” portion, all five candidates answered the question: “What is the greatest contribution of your country to the world? ” posted by a netizen on the Miss Universe official Facebook page.

Miss USA Nia Sanchez said that her country always “gives back” to other nations. Miss Netherlands cited her country’s art and history as the contributions of Netherlands to the world.

Meanwhile, Miss Ukraine narrated the current situation in her home nation recovering from war. Fennell cited legends Usain Bolt and Bob Marley as their country’s contribution. Lastly, Miss Colombia Paulina Vega said that the perseverance of the Colombian people amid problems is the offering of her country to the world.

Philippines bet Mary Jean Lastimosa was able to secure a position in the competition’s Top 10 but fell short in joining the Final 5.

Lastimosa ended the four-year streak of the country in securing a place in the “final five” of the prestigious beauty pageant.

Vega gets a one-year contract with the Miss Universe Organization which she will represent while promoting the various causes of the group. She also gets an apartment in the Trump Tower in New York City during her reign. AJH