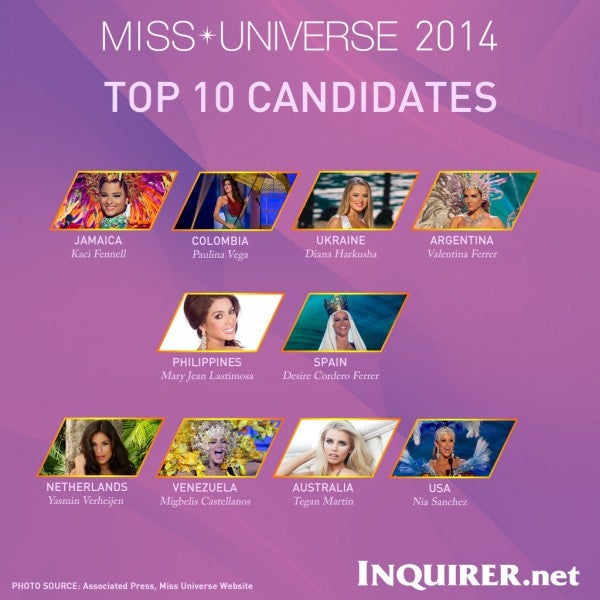 MANILA, Philippines—Philippines bet Mary Jean “MJ” Lastimosa inched closer to the much coveted Miss Universe 2014 crown after making it to the Top 10 of the competition Monday morning (Philippine time).

Lastimosa was stunning as she strutted the stage in her pink Yamamay swimsuit.  Singer Prince Royce performed “Stuck on a Feeling” as the Top 10 candidates walked down the stage in their swimsuits.

The North Cotabato beauty was the fifth candidate to be called.

The top 10 candidates for this year’s pageant are:

Before the announcement of the top 10 candidates, Miss Universe 2013 Gabriela Isler was interviewed. Isler said that she was proud to be an ambassador of the country.

“I found what I loved to do,” the Venezuelan beauty said.

Philippines was also featured as the Miss Universe Organization raised $250,000 for its relief fund for the victims of super typhoon “Yolanda” (international name: Haiyan) which slammed the country in 2013.

Filipino boxing champion Manny Pacquiao was one of the judges of the Miss Universe 2014. He was introduced as the “fighter of the decade.” Meanwhile, Miss Universe 3rd runner up Ariella Arida also served as a backstage and red carpet host of the 63rd edition of the beauty pageant.