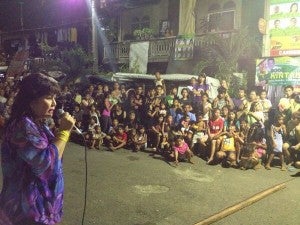 “It’s not the end of my political career… I shall return. This does not signal the end of my support to Cebuanos. *Serbisyo dili negosyo* (service not business),” Rama announced on her Twitter account, also on Wednesday.

Rama congratulated her “opponent” and reminded him to “use your pork barrel wisely.” She then said she has seen how poor the Cebuanos are, especially in the northern district, and hoped that helping them would be Del Mar’s top priority. “Have pity on these people,” she pleaded.

Rama added that she was happy with the victory of her cousin, incumbent Cebu City mayor Mike Rama. “Now he will be able to continue all his past projects that will help improve the lives of people in Cebu City,” she said.

The wife of veteran actor Eddie Gutierrez and mom to showbiz celebrities Ruffa, Richard and Raymond, then thanked her supporters. She said she never regretted the “six-month journey” she has made while campaigning. “It was a good experience. I was able to help a lot of people.”

Rama said it was through this experience that she learned who her true friends are—those who supported her up to the end. “I’m thankful to all my supporters in the north district of Cebu,” she declared. Rama ran under the opposition United Nationalist Alliance (UNA).