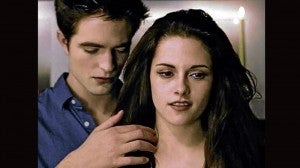 PATTINSON AND STEWART. Expect the unexpected.

MANILA, Philippines — The Catholic Bishops Conference of the Philippines (CBCP) movie ratings board has found a “pro-life” message in the vampires and werewolves movie “Breaking Dawn 2.”

In fact, the CBCP-Catholic Initiative for Enlightened Movie Appreciation (CINEMA) has recommended that the faithful watch the movie—the last installment of the Twilight series—and read the novel on which it was based.

The board gave it a “moral assessment” rating of “3.5 stars” or halfway between acceptable (three stars) and wholesome (four stars).

“CINEMA recommends both the novel and the movie for teenagers as it brings into focus the value of marriage, the need to protect life in the womb and the importance of family,” the ratings board said.

“If there is one thing Breaking Dawn 2, emphasizes it is the importance of family and how one’s love for them would compel us to sacrifice, fight and risk everything for their sake. The film also shows that a family not only means one blood relative,” the board said.

“Breaking Dawn 2—and perhaps the entire Twilight series—is not a vampire story where the creatures kill or are hunted but a story about love, acceptance, family and sacrifice set in a time where vampires and werewolves existed,” it added.

While giving the film an “average” rating for its technical aspects, the board was quick to point out that it was “remarkably clean and enjoyable.”

“There is that seamless overlapping of real action and CGIs that audience can easily get lost inside the fantasy world. Storywise, it did stay faithful to the book but interpreted it a tad too slow and trite with too much sentimentality and MTV-moments,” CINEMA said.

“However, it was a good directorial call to include the battle scene between the two groups as it added the much needed action and recaptured the audiences’ sympathy towards the characters,” it said.

The board noted that Breaking Dawn 2 picked up the story from the last sequel and “sees a fully transformed mother and vampire in Bella (Kristen Stewart), who embraces this new life with great happiness. Renesmee (Mackenzie Foy), Bella and Edward’s daughter, is special.”

“Not only is she half vampire—gifted with superhuman speed and strength and the ability to penetrate mental shields and project her thoughts to another; she is also half human—warm blooded and with the ability to grow and mature,” CINEMA said.

“But Bella’s fairytale is doused with stinging cold waters when Irina, a vampire from the Denali clan tells the Volturi that the couple violated one of the most important laws and created an immortal child,” it said.

“Now, Bella realizes she has to protect her child from the Volturi. So the Cullens gather witnesses from foreign covens and Jacob’s new pack in the hope of standing up against the Volturi,” it added.

The board said that while the actors “displayed understanding and chemistry of both their roles and with and one another’s characters,” Bella still had “that irritating insecure awkwardness as a vampire—a far comparison to the mysterious iciness of the rest.”

“But, of course, of all of them Bella is the only one who wanted to become a vampire,” CINEMA said.

“There had been critics of Bella’s immaturity in the previous films as well as disdain towards a story that centers on a girl chasing a boy the last installments.  Here a more mature and selfless Bella emerges and shifts her attention from herself and her heartaches to her family and loved ones,” it added.