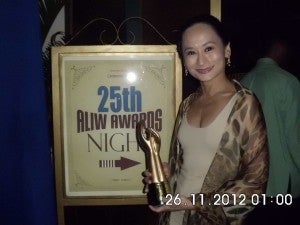 MANILA, Philippines—In a decision that surprised but delighted everyone, including the awardee, the Aliw Awards Foundation on Monday night at the Fiesta Pavillion in Manila Hotel gave the much coveted “Entertainer of the Year Award” to internationally acclaimed prima ballerina Lisa Macuja.

For the past 25 years since it was founded, Aliw Awards have been known to give the trophy to a live performer from a more popular form of entertainment like singing or acting. If given to a dancer, it could be more of a Sex Bomb or EB Babes masa type.

Macuja was aware of this and in her nearly tearful acceptance speech, she thanked Aliw Awards for recognizing ballet as a popular form of live entertainment.

Macuja’s mission in life, as most people knew, has always been to make every Filipino, no matter his or her status in life, appreciate ballet.

Given also the fact that she had just celebrated her retirement as ballet dancer in a series of performances dubbed “Swan Song,” Macuja found the recognition as timely for her graceful 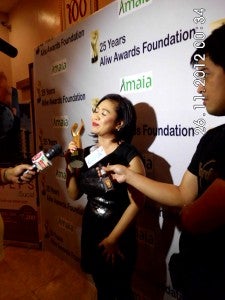 Macuja brought home “the biggest trophy of the night” for the said category plus a few more.

She was named “Best Classical Dancer” for “Swan Song Series” by Ballet Manila, Best Dance Company for Ballet Manila and for Best Collaboration In A Concert for the show “Legends and Classics,” which she did with fellow living icons Lea Salonga and Cecile Licad.

Macuja’s co-dancers in Ballet Manila and some family members were there in the awards night.

As for reactions in giving Macuja the “Entertainer of the Year” award, a senior member of the selection committee who shall remain nameless for privacy and security reasons—given the controversies that usually accompany any award-giving bodies—said frankly it has been the tradition of Aliw to hand the said recognition to the one who will get the highest number of awards.

“Miss Macuja got the most number of awards tonight so naturally she is our ‘Entertainer of the Year’,” said the judge. 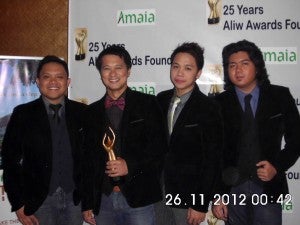 A columnist who also requested anonymity put in rather blatantly: “By choosing Lisa Macuja, Aliw Awards has regained its credibility. For a long time, this award-giving body has been tainted with controversies.”

Another awardee, singer-actress-performer Isay Alvarez said that though she’s been nominated and has won awards as a stage actress, it’s her first time to be recognized as a singer. Alvarez brought home the “Best Performance In A Concert (Female)” for her show titled “Swings Out with AMP Band” at Teatrino in Greenhills.

Then again for a few members of the audience, there were also some eyebrow-raising choices.

He beat more popular directors like Soxie Topacio for the highly entertaining “Bona” of Peta and Bobby Garcia for the acclaimed, very intense “God of Carnage” by Atlantis Productions. 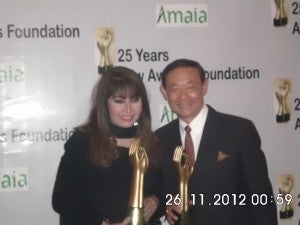 Though there’s no doubt that Domingo gave a stellar performance that made audiences laugh and cry just like in her movies, many believed the three other actresses mentioned had more challenging roles that they all gave justice to.

But as the saying goes, you can’t please everyone.

There were also some lapses in the reading of nominees and announcement of winners. The projector and the announcer didn’t jive at all.

The visuals containing the names and photos of the nominees were projected onscreen faster than the one reading the program’s script. 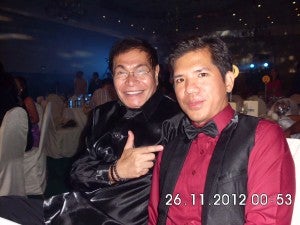 Before the host-announcer could finish reading the names, the audience already knew the rest of the nominees because of this mismatching.

At one point, the assigned reader-presenter of the winner who only depended on the visual projection onstage gave the wrong name.

In the “Best Performance In A Concert (Group)”, the lady reader said it’s Parokya Ni Edgar who won but the real awardee was rapper-rocker Gloc 9.

Whether it’s good or bad, members of the said rock band and Gloc 9 himself were no-shows that night.

A senior member of the jury had to stand up from his seat a few tables away from the stage and correct the mistake, shouting to the reader that it’s Gloc 9 who’d won the award.

Gloc 9 was represented by talent manager Noel Ferrer, who received the trophy in his behalf.

Also a no-show at the event was Sarah Geronimo, who won the “Best Major Concert (Female)” award for her “SG/24” show at the Araneta Coliseum.

Some kibitzers murmured the name of Aiza Seguerra instead, who was there to receive an award for her acting in the musical “Rock of Ages”. She thanked Aliw for it and for allegedly giving her the wrong trophy which she happily read “Best Actor in a Featured Role.”

The night was buoyed up with live performances of various groups, most notably the UP Singing Ambassadors (“Hall of Fame” awardee), The Filipino Tenors (Best New Artist/Group) and Jed Madela, winner of “Best Major Concert (Male)” award for his “Beyond Expectations” show at the CCP.

Director Freddie Santos, recipient of “Best Stage Director (Musical)” for the ongoing musical “The King and I” at the Resorts World Manila, summed up what the organizers and 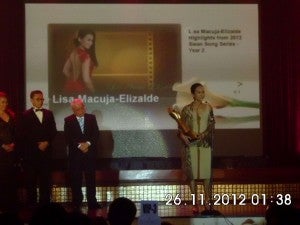 awardees had in mind that night.

In his thank-you speech, he said it’s all about giving all live performers—dancers, singers, actors, stand-up comedians and the like—their due recognition.

Despite a few glitches, the awards night was a resounding success that lasted past Monday midnight.

Best Performance In A Concert (Female): Isay Alvarez (Swings Out with AMP Band/Teatrino)

ENTERTAINER OF THE YEAR: Liza Macuja