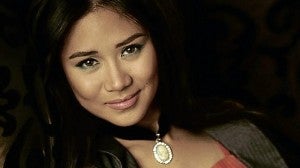 MANILA, Philippines—Move over Manny Pacquiao. The country’s Pop Princess Sarah Geronimo could just be the next poster child of the Philippine Army.

The Philippine Daily Inquirer learned that the Army has been thinking of commissioning Geronimo into the military’s reserve force after her support for the Armed Forces of the Philippines campaign to win the peace.

Geronimo, 24, sang the Army’s “Bayanihan: Para sa Kapayapaan” theme song, complete with a music video that was launched on Wednesday at the Army headquarters.

The AFP was able to save P10 million from the total cost of the music video production after Geronimo waived her multi-million-peso talent fee upon learning that the project was for the government’s peace advocacy.

“She waived her talent fee and there were no questions asked. She said this will serve as the contribution of the entertainment industry in promoting peace,” Undersecretary Lesley Jeanne Cordero of the Presidential Communications Operations Office (PCCO) said in a press conference at the Army headquarters.

However, Geronimo and her manager, VIVA Entertainment big boss, Vic del Rosario, were both unable to attend the music video’s launch because of their tight schedules.

Geronimo so impressed the AFP leadership with her humility and sincerity that a military official told the Inquirer that the pop star might be asked to join the Armed Forces as a reserve officer.

“We’ll wait for her to finish her college degree so that she could be commissioned as an officer,” the military official said, on condition of anonymity, as he was not authorized to discuss the idea.

Pacquiao, a district representative of Saranggani Province, was commissioned into the Army first as a sergeant until he became a Lieutenant Colonel for bringing pride to the Philippines for his feat as a boxing champion.

Army spokesperson, Maj. Harold Cabunoc, said that Geronimo was tapped to sing the AFP’s peace theme song because of her reach to the youth sector.

Cabunoc said that through the “Bayanihan” song, the military wanted to raised public awareness and send the message that “winning the peace is a shared responsibility among various stakeholders,” which include the youth sector.

An Army statement said that the “Bayanihan” song was composed and originally performed by LTJG Lady Chatterly Alvaro-Sumbeling, a younger sister of singer DJ Alvaro.

The Army also said that there would be a simultaneous launching of the “Bayanihan” music video in all television and radio stations nationwide, as well as on the Internet, social media sites, and in selected movie houses.

The production and release of the music video was done in collaboration with various government agencies and Viva Entertainment, Inc.