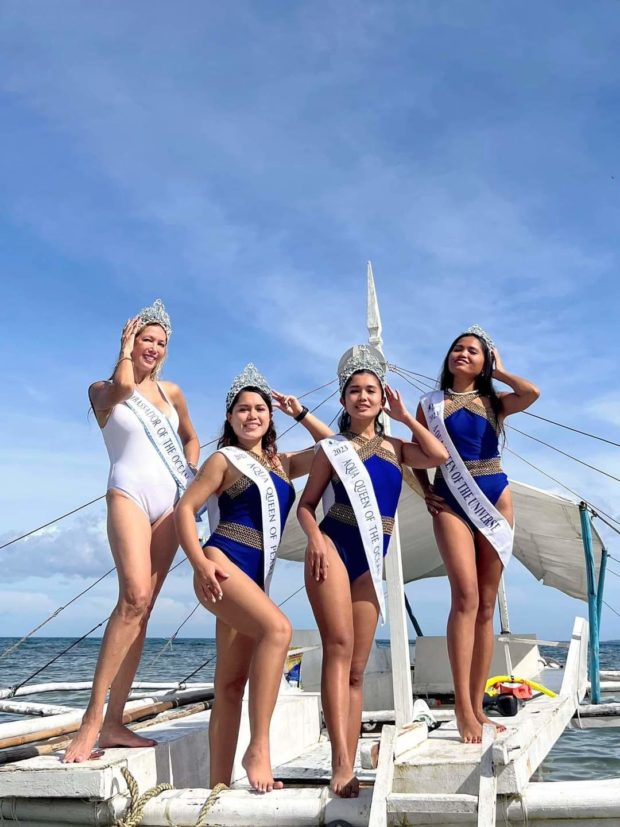 MANILA, Philippines — To further heighten the need to conserve the country’s aquatic resources, the Aqua Queen of the Universe pageant conducted the first underwater coronation of titleholders in the country on Jan. 20 in Panglao, Bohol.

The pageant attracted freediving enthusiasts from all-over the country, and gathered the top three aspirants in the popular Visayan beach destination for the official conferment of titles. All three finalists received their respective crowns.

Debora Celedio Mariotti from the host province received the top title Aqua Queen of the Universe from the pageant’s founder and 2022 queen Eren Noche, while Almie Rita Carajay from Iloilo was proclaimed Aqua Queen of the Ocean. Al Christian Adap from Laguna was hailed as Aqua Queen Pearl.

Reigning Noble Queen of the Universe Ltd. Marjorie Renner had earlier received the title as Aqua Queen Ambassador of the Ocean. She owns Whitehouse by the Sea which hosted the pageant’s officials and participants in Panglao. She takes over from actress Patricia Javier who Noche proclaimed as fellow 2022 queen bearing the “Ambassador of the Ocean” title.

“[A] title comes with responsibilities. But first, I want to express how fortunate I am to have been part of this competition, and truly humbled to be chosen as Aqua Queen of the Universe,” Mariotti posted on Facebook.

“I wholeheartedly want to make a voice and make a difference in [the] freediving community, and that will continue from this day moving forward,” she continued.

Noche earlier said the Aqua Queen of the Universe pageant seeks “ocean advocates” to help promote the protection of the seas and oceans in the world. EDV