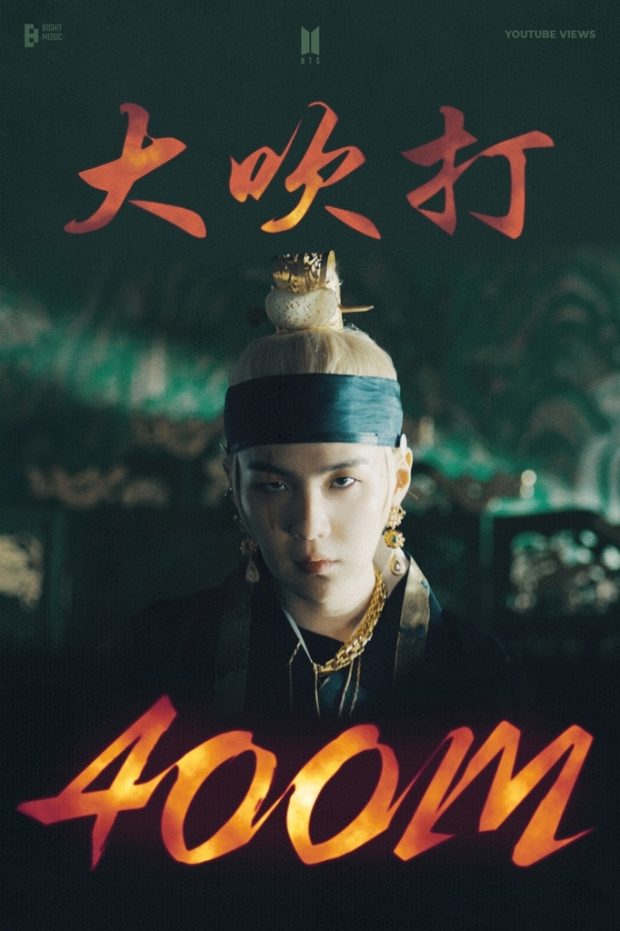 Suga of BTS amassed 400 million views on YouTube with the music video for his solo work “Daechwita,” according to label Big Hit Music on Monday.

The video came out in May 2020 and reached the milestone on Sunday.

The song hit the Billboard Hot 100 at No. 76 and the mixtape on listed on the Billboard 200 at No. 11, entering both charts simultaneously for the first time as a solo K-pop musician. The No. 11 spot was the highest rank for a K-pop solo act at the time.

In the meantime, he announced via Twitter last week that he will launch a talk show — titled “Suchwita”– on YouTube on Dec. 5.

BTS’ Suga to launch his own talk show ‘Suchwita’

Read Next
25 years in the biz, Allen Dizon no longer in it for the money
EDITORS' PICK
House energy committee chair Arroyo bats for cheap electricity
Marcos told: Comply with ICC probe to give justice to victims of Duterte’s drug war
Inexplicable price hikes, supply confusion: After onion, garlic may be next
Viral phone HONOR X9a 5G launched at P16,990
ICC resumes probe on PH’s drugs war
Things you can do with vivo Y02s’ upgraded 3GB+64GB storage
MOST READ
DFA ready to face ICC probe into war on drugs
Panlasang Pinoy vlogger airs frustration after family’s belongings stolen in flight to PH
LOOK: Heart Evangelista joined by husband Chiz Escudero in Paris
Bea Alonzo reveals she will ‘never’ be friends with Gerald Anderson
Don't miss out on the latest news and information.